Papaya (Carica papaya L.), a plant native to tropical America, is popular in the subtropics for its easy cultivation, rapid growth, quick economic returns, and adaptation to diverse soils and climates (Harkness 1967, Seelig 1970, IIHR 1979, Campbell 1984). Cultivated papaya is a small, unbranched, and usually dioecious plant, although hermaphroditic sex types occur (Harkness 1967, Seelig 1970, Samson 1986). The melon-like fruits have a sweet taste and agreeable flavor, and are high in vitamins (A, B1, B2, C) and minerals (Ca, K, P, Fe), low in sodium, fat, and calories, and contain practically no starch (Seelig 1970, IIHR 1979, Samson 1986). Unripe fruit can be cooked as a vegetable much like a summer squash or used in cubes for salads. Papaya leaves have been employed in place of soap for washing delicate fabrics (Seelig 1970). Papaya latex contains 4 identified proteolytic enzymes (papain, chymopapain A and B, and papaya peptidase A). In food industries papain is used to tenderize meat and clarify beer; has uses in photography, leather, wool and rayon industries; and has value as a remedy in dyspepsia and similar ailments (Seelig 1970, Poulter and Caygill 1985).

In recent years, consumer interest in exotic fruits including papaya, has increased in the United States (Vietmeyer 1984). Hawaii which produced 7 million pounds of papaya valued at $17 million in 1984 (Couey 1985) is the main source (70% of production) of papaya consumed in the mainland United States. Florida produces papaya only sufficient for local consumption.

In the greenhouse, seeds of three lines of papaya from India (L-45, L-50, and Dwarf) germinated in 2 weeks during February using flat trays containing a 1:1 mixture (v/v) of vermiculite and peat moss. Papaya seedlings with 2 to 4 true leaves were transferred to 15 cm pots filled with sterilized soil and peat moss (1:1 v/v) and held in the greenhouse until transplanting in the field when danger of frost was over. Two-months-old seedlings were planted in the field 1 m apart in rows during late May 1986, early May 1987, and the middle of April 1988. Following a minor transplanting shock, field plants grew vigorously, were healthy, and had a uniform stand during the study period (Fig. 1). The plantings were maintained using standard cultural practices recommended for this crop (Harkness 1967). Supplementary irrigation was provided during dry periods. There were no serious problems of insects and diseases but a viral infection caused leaf and fruit spots for which there is no control (Harkness 1967, Malo and Campbell 1975, IIHR 1979). Each year, flowering and fruit setting on most of the plants began 80 to 90 days following transplanting in the field (Fig. 2). Due to the relatively short growing season in Georgia, these lines produced fewer fruits per plant than would occur in tropical or subtropical climates (Seelig 1970). Cold temperatures in the fall suppressed vegetative growth and reduced flowering. Papaya flowers continuously in warmer climates (Seelig 1970).

Plant height, number of fruits per plant, and fruit weight, were significantly different for each line. The line L-45 which had plants of medium height, was the most efficient producer. The average weight of ripe fruits per plant harvested from the 1988 crop during the first 60 days of 1989 was 1.7 kg. Based on 3,000 pistillate plants per hectare, the total yield of marketable fruit (including ripened, and green papaya as a vegetable) for L-45, L50, and Dwarf was 85.4, 20.2 and 47.3 tonnes per hectare, respectively (Table 1). These yields are similar to those reported by other researchers (Seelig 1970, Ram 1983, Campbell 1984, Samson 1986).

In 1986, more than 50% of fruits on plants attained full size, but failed to reach firm-ripe stage before the onset of the cold or freezing weather in October. A protective structure containing a double layer of 6-mil polyethylene along with two portable kerosene heaters (Fig. 3), maintained the inside temperature above 10°C for 75 days during late fall but this was insufficient to ripen fruit. Mature fruits were harvested and kept covered in straw in the laboratory where some softened and/or partially ripened at room temperature after several days. These laboratory ripened fruits provided seeds for the 1987 planting. To enhance fruit maturity and also promote ripening of fruits while on the plants during 1987, plants were sprayed with (2-chloroethyl) phosphonic acid (ethephon), but an unseasonal frost in early October damaged foliage and slightly injured fruits. A few fruits of L-45 did reach firm-ripe stage and provided seeds for the 1988 planting. During fall 1988, we used two electric heaters inside the shelter to protect plants and hasten fruit ripening. Several fruits per plant have already ripened on plants by March 1, 1989.

Our studies indicate that papaya can be grown in Middle Georgia if frost damage can be prevented. The earlier the plants are set in the field the greater the yield. One strategy would be to set plants under protective structures with or without heat to extend the season in order to reduce or eliminate the need for frost protection in the fall. A market could be developed for green and immature fruit which can be consumed as a vegetable or used in salads. Studies are continuing to determine if papaya can be grown as a profitable crop in middle Georgia.

Table 1. Performance of 3 exotic lines of papaya grown under the growing conditions of Middle Georgia during 3 years (1986-1988).z

zMeans in columns followed by the same letter are not significant (P<0.05 DMRT).
yValues are 3 years averages. 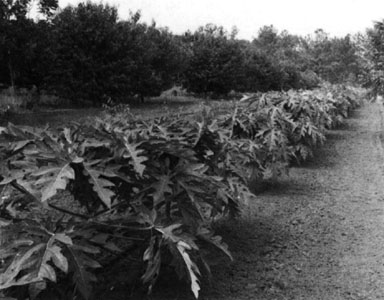 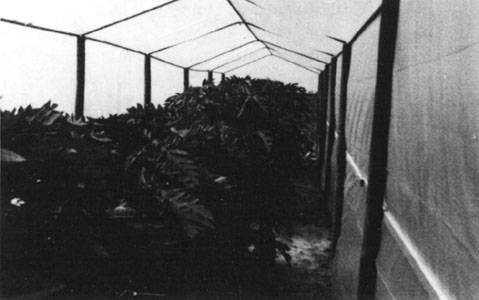