Melofon: A New Crop for Concentrated Yield of Pickles

Although pickling cucumber (Cucumis sativus L.) is an important crop in the pickling industry, it requires costly labor for hand picking. Despite extensive breeding efforts, there has been only limited success in concentrating yield for once-over mechanical harvest. Pickling melons (Cucumis melo L.), which are very similar to pickling cucumber in taste, flavor and processing suitability (Nakamura and Ishiuchi 1985) have been bred "with birdsnest-type and hermaphroditic muskmelon lines in order to increase yield concentration (Nerson et al. 1986, 1988).

Melofon, the new crop derived from this breeding program is characterized by its' high yield and adaptability to a once-over harvest system. In this study, the yield potential of advanced melofon lines is compared to pickling cucumber cultivars in both small experimental and semi-commercial plots. The fruit yielding ability of 70 experimental melofon hybrids were determined in order to select parental lines with the best general and specific combining ability for concentrated fruit yield and quality.

Ten advanced breeding lines of melofon were compared to ten cultivars of pickling cucumber during the spring of 1988 at two locations, Newe Ya'ar (NY) and Bet HaShitta (BH), the western and eastern ends of Yizre'el Valley, Israel respectively. Seeds were sown in mid-April on raised beds 2 m apart. Each bed contained two rows of plants spaced 15 cm apart in the row (66,700 plants/ha). Each entry was replicated in four 2 x 2 m plots in a randomized block design. Each plot was harvested for once-over yield when 10% of the fruits were over-sized (diameter >50 mm). Fruits were graded into four categories: a) <27 mm; b) 27-35 mm (a+b=small fruits); c) 36-50 mm (a+b+c=commercial fruits); and d) >50 mm (=oversized). The fruits of each category were counted and weighted.

Four breeding lines of melofon were compared to one pickling cucumber cultivar ('Passion') and one line (NK 2002) during the spring of 1988 at BH. Sowing procedure was as described above, except that a wider row spacing (25 cm between plants, 40,000 plants/ha) was used. Each entry was seeded in a 100 m2 plot. Harvest of all fruits was conducted 52 and 59 days after seeding and fruits were graded, counted and weighted as described above.

Yield (fruit number and weight) differences between melofons and pickling cucumbers were remarkable in the semi-commercial plots trial (Table 3). The melofon line D17-5-135-1-5 set about 10 fruits/plant simultaneously in both pickings. The fruits of this line are round and therefore another quality grading method must be developed for them. The melofon line P6a-3-133-80-5-1-1 have cylindrical short light green fruits and has potential for high concentrated yield (Table 1, 2, 3). In this trial, it had not been harvested at the optimum time. Harvest dates were selected to meet line D17-5-135-1-5 optima, therefore, the first harvest was early and the second late for line P6a-3-133-80-5-1-1. Line P20a-8-9 segregated for bitterness and is being subjected to further selection.

Seventy experimental hybrids of melofon were obtained by reciprocal crossing among 10 advanced breeding line in the fall season of 1986. These hybrids and parental lines were seeded in 3 replicates of 5 x 2 m plots at NY in April 1987. Harvest procedure and yield determination were the same as above. Lines 3, 10, 2, and 9 were the highest yielding among the ten which were used for experimental hybrid production (Table 4). These lines were also among the best in later trials (Table 1-3). Of the best ten hybrid, lines 3, 1 0, and 2 were used as parents in 4 cases and line 9 in 2 cases (Table 4). Overall, line 3 (D17-5-135-1-5) was a source of remarkable fruit-setting capacity. This characteristic in hybrids is generally intermediate between parents but in some cases the hybrids were higher than both parents (Table 4). No relationship exist between fruit number and yield. This may be due to present grading system since it takes into account only the maximal diameter. In this case the cylindrical fruits are heavier than the oval and the oval are heavier than the round. Thus, when comparing the yield potential of lines with different fruit shapes, only the fruit number per unit area is a valid parameter.

Melofon, a new cucurbit crop for processing, has a more concentrated yield than pickling cucumber, and therefore has potential for mechanical harvesting.

Melofon plants are vegetatively more vigorous than pickling cucumber and therefore must be grown at relatively low plant densities.

Round and oval fruit shape of some melofon lines (Fig. 1) will require new agrotechnic systems including the determination of optimal once-over harvest time and unique grading scales.

Selection within open pollinated and F, melofon germplasm could result in more uniform genotypes and improvement in yield concentration. 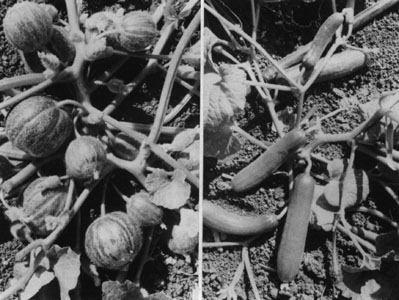