Artemisia annua L. (annual wormwood, sweet wormwood, sweet annie), a highly aromatic annual herb (Fig. 1) of Asiatic and eastern European origin, is widely dispersed throughout the temperate region (Bailey and Bailey 1976, Simon et al. 1984). The species has naturalized in the United States and is sold on a limited scale as a dried herb for the floral and craft trade where it is used as an aromatic wreath. The plant has traditionally been grown in China as a medicinal and, more recently in Europe for its aromatic leaves which are used in flavoring beverages.

Recent research in the Peoples Republic of China with traditional herbal medicine has brought attention to A. annua, the source of qinghaosu (artemisinin), a compound that shows promise as an anti-malarial agent (Klayman 1985). Artemisinin has also been reported to be a potent plant inhibitor with potential as a natural herbicide (Duke et al. 1987, Chen et al. 1987). Artemisinin and its derivatives, artemether and artesunate, have been studied for their efficacy as antimalarial agents. In in vitro trials conducted in China (WHO 1981), all three compounds have been effective against the erythrocytic stages of two chloroquine-resistant Hainan strains of Plasmodium falciparum, the malarial parasite, at lower minimum effective concentrations than chloroquine, the most commonly used drug. Artemisinin and its derivatives have effectively treated malaria and cerebral malaria in human subjects with no apparent adverse reactions nor side effects (Klayman 1985). With P. falciparum developing resistance to chloroquine and pyrimethamine/sulfonamide (WHO 1981), alternative treatments based on new compounds such as artemisinin and its derivatives are actively being sought. While artemisinin and its derivatives may be synthesized (Zhou 1986, Xu et al. 1986), the synthetic compounds are unlikely to be economically competitive with the naturally derived plant products (Schmid and Hofheinz 1983, Xu et al. 1986).

The relatively low content of artemisinin in cultivated European and New World types of A. annua has been a limiting factor for the isolation and evaluation of artemisinin on a technical scale. Artemisinin yields of 0.06% have been extracted from samples of A. annua collected in the United States (Klayman et al. 1984) which are low for commercial exploitation. Yields of extracted artemisinin from the above-ground portions of the plant have ranged from 0.01% to 0.5% (w/w) in the People's Republic of China (WHO 1981). Although artemisinin yield varies with environmental and management conditions (WHO 1981), specific effects are unknown. The extent of genetic variation on artemisinin content was also poorly understood.

Since 1984, we have been evaluating the plant s production potential determining its horticultural characteristics, and developed a rapid assay to determine artemisinin content from crude plant materials in anticipation of future improvement programs. Essential (volatile) oil composition was characterized in order to evaluate A. annua as a source of aroma chemicals for the fragrance industry

Artemisinin is a secondary or natural plant metabolite identified as a sesquiterpene lactone endoperoxide (Klayman et al. 1984). Artemisinin has been synthesized and its structure and absolute stereochemistry established by Zhou (1986) and Xu et al. (1986), but biosynthetic pathways and the mechanisms and regulation processes are unknown. Analysis of artemisinin is difficult because the compound is unstable, concentrations in the plant low, the intact molecule stains poorly, and other compounds in the crude plant extracts interfere in its detection. A method to analyze artemisinin in crude plant extracts based upon high pressure liquid chromatography (HPLC) with reductive mode electrochemical detection was first developed by Acton et al. (1985) and later modified by Charles et al. (1990). This latter method is highly sensitive, rapid, and should be of value in analyzing large numbers of samples as needed in crop improvement programs.

Using this later method, we evaluated our germplasm collection of A. annua for artemisinin content to determine whether there was genetic variability that could be exploited and to identify plant lines and individual plants with high concentrations (Charles et al. 1990). Wide variation in artemisinin content was observed with accessions in our collection ranging from 0.003 to 0.21%, and with individual plants ranging from 0.00 to 0.39% (dry weight basis). This data suggests that artemisinin productivity could be enhanced by further selection and breeding.

Essential oils of A. annua can be extracted via steam distillation in units similar to that used in the commercial distillation of peppermint and spearmint. Essential oils of A. annua were extracted in our studies via hydrodistillation with a modified clevenger trap (Simon and Quinn 1988) and chemically characterized by gas chromatography (GC) analysis using a fused silica capillary column (12 m x 0.2 mm id) with a OV 101 (Varian, polydimethylsiloxane) bonded phase. Direct injection of 0.5 ml of essential oil samples with He as a carrier gas (100:1 split vent ratio) and oven temperatures held isothermal at 80°C for 2 min and then programmed to increase at 3°C/min to 210°C gave complete elution of all peaks (sensitivity 10-10). The injector and detector temperatures were 210°C and 300°C, respectively. Confirmation of essential oil constituents was based upon comparison of retention time with standards and via GC/Mass Spectroscopy analysis.

Essential oils and artemisinin were assumed to be associated with secretory cells based on the association of mono- and sesquiterpenes with well-defined secretory structures (Croteau 1986, Henderson et al. 1970). The relative distribution of artemisinin is shown in Table 1. Leaves had 89% of the total artemisinin in the plant with the uppermost foliar portion of the plant (top 1/3 of growth at maturity) containing almost double that of the lower leaves (Charles et al. 1990). Kelsey and Shafizadeh (1980) had reported that 35% of the mature leaf surface is covered with capitate glands which contain most of the monoterpenes and virtually all of the sesquiterpene lactones. Essential oils from A. annua are similarly distributed, with 36% of the total from the upper third of the foliage, 47% from the middle third, and 17% from the lower third, with only trace amounts in the main stem side shoots, and roots.

Plants from the densely populated treatment (111,111 plants/ha) produced an average fresh weight of 275 g/plant, as opposed to 430 g/plant from the intermediate and 750 g/plant from the lowest populations. However, total biomass (fresh weight kg/ha), was greatest from the higher density population (Table 2). Plants of the most densely populated treatments were slightly taller, produced less side shoots, and had longer internodes with little lateral growth than the lower densities. Number of side shoots per main stems decreased as density increased. While yield increased with added nitrogen, the greatest growth (herbage and essential oil content) was obtained with 67 kg N/ha (Table 2).

Increasing density tended to increase essential oil production on an area basis, but highest essential oil yields (85 kg oil/ha) was achieved by the intermediate density at 55,555 plants/ha receiving 67 kg N/ha (Table 2). Artemisinin content was not analyzed in this study because the instrumentation and method of analysis had not yet been developed in our laboratory

Seedlings of A. annua were transplanted into a central Indiana field on April 27, May 17, June 10, and July 13, 1987, and plant samples (for growth and essential oil) were obtained every two weeks until the first frost (Fig. 2, 3). The May transplanting date produced the highest fresh yields and tallest plants, while the May and June plantings had the highest percentage of essential oil. Regardless of planting date, all plants began to flower by mid-August, with maximum concentration of essential oil produced in mid-September (peak flowering stage). Results from the 1988 growing season (data not presented) were similar to those obtained in 1987.

Plantlets of A. annua were regenerated using shoot tips of mature field grown plants. Shoot tips were surface sterilized and cultured in Murashige and Skoog (MS) media with factorial combinations of 2,4-D (0, 0.1, 1.0 mg/liter) and benzyladenine (BA) (0, 0.1, 1.0 and 10.0 mg/liter). Both axillary and adventitious shoots were produced in all the treatments. BA alone at 10 mg/liter produced the greatest number of shoots, but the most normal shoots were obtained at 1.0 mg/liter. Shoots were easily multiplied on MS medium with 1 mg/liter BA and subculturing at 4 week intervals. Artemisinin was detected from in-vitro shoots of A. annua, in concentrations from 0.03 to 0.05% (dry weight basis).

All shoots rooted when dipped in commercial preparations of 0.3% indolebutyric acid and placed in potting soil under mist conditions. Acclimatization to in vivo conditions was easily achieved. This technique will permit rapid increases of individual plant selections.

We have found that A. annua is relatively easy to grow and that very high biomass yields (35t/ha) can be obtained in the Midwest. Plant spacing had a highly significant affect on biomass yield and plant architecture. Wide variation in artemisinin content has been found in our germplasm collection with accessions reaching 0.21%, and individual plants as high as 0.39% (dry weight basis). This suggests that high artemisinin yields lines could be developed by further selection and breeding. The commercialization of A. annua in this country is dependent upon whether artemisinin or its derivatives will be approved for use in the treatment of malaria. Domestic production of A. annua for the extraction and processing of artemisinin for export should be considered as overseas markets develop and if they will purchase imported materials.

Artemisia has potential as a source of essential oils and we have obtained oil yields of 85 kg/ha. Uses of the essential oil from A. annua in the fragrance industry would provide an additional market and a new use for this species.

Table 2. Fresh weight and oil yield of Artemisia annua in response to plant spacing and nitrogen application (average yields from 1985 and 1986). 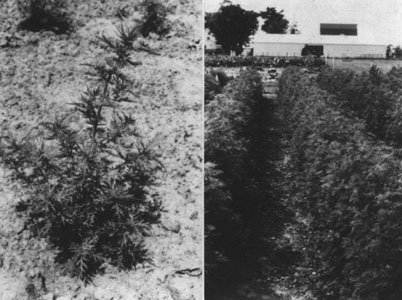