Sweetgrass is a native, perennial, warm-season grass found growing sparsely in the coastal dunes extending from North Carolina to Texas. The "treads" or long, narrow leaf blades of this grass have been harvested by direct descendents of enslaved Africans of antebellum South Carolina and used as the principle foundation material for constructing African coiled basketry in the Southeast, especially near Charleston (McKissick Museum 1988). Originally, these graceful products provided useful, practical objects or "work baskets" for agricultural and household use on the plantations; today, they have evolved as souvenirs treasured by tourists, and elegant objets d'art (Fig. 1).

Basketmakers are faced with changes and challenges that threaten the existence of their craft. The supply of sweetgrass is becoming more difficult to acquire because the natural habitats of sweetgrass have significantly diminished. Two primary factors have led to this situation. First, the urbanization of the area around Mt. Pleasant has led to the destruction of much of the natural sweetgrass plant communities. Second, the traditional gathering areas on the Barrier Islands off the coast of Charleston, have been developed as beach resorts or private communities with restricted access. Basketmakers now have to travel to Georgia and Florida to find adequate supplies.

Natural habitats of sweetgrass need to be preserved, protected, or relocated if this industry is to continue. The basketmaking community will need help from local governments to continue to sell baskets along the old Ocean Highway (Hwy 17) or relocate the stands to equally visible, safe locations. Alternatively, the ability to cultivate sweetgrass on inland soils in the Mt. Pleasant area would enable the production of readily available raw material. These practices would help to insure that the heritage of basketmaking will continue to flourish into the 21st century.

Mt. Pleasant, South Carolina, is located four miles north of Charleston on U.S. Hwy 17. Baskets are sold in a variety of places in the Charleston area. About 75 basket stands dot the old Ocean Highway in Mt. Pleasant. Baskets are also sold by the "basket ladies" in Charleston's Market area and even on major intersections within the historic areas of the city.

The variability of African baskets is as diverse as the 800 different ethnic groups that comprise the African people (Vlach 1978). Only certain African people however, especially those from Senegal, were brought to South Carolina as early as 1505 with the advent of the slave trade in the New World. By the end of slavery around 1808, Africans were abducted from areas down to Central Africa and Mozambique.

Rice was the main cash crop of South Carolina during the colonial period and the base of the State's economy until the 19th century. Slavers were paid premium prices for Africans from the West African Rice Kingdoms of the Windward Coast (Senegal to the Ivory Coast) and the mouth of the Congo River (Gabon, Zaire, and Angola) (Littlefield 1981). A man or women who made baskets was worth more than one who did not, age, strength, and other skills being equal (Chas. Gaz. Adv. 1791). Since colonial South Carolinians knew little of rice culture, the success of the American Rice Kingdom is credited to enslaved Africans (Joyner 1984).

The technique of basketmaking crossed the Atlantic in slave ships and took root in the new land. The art of making sweetgrass baskets is a three-century old African-American tradition that has been "passed-down" over the centuries from parent to offspring. Sweetgrass basketmaking is one of the earliest traditional rafts with a rich documented history from "carryover" from African enslavement and plantation days to the present (McKissick Museum 1988). Although the materials used are different in the United States, the form and function of the African counterparts of sweetgrass baskets are unchanged to this day (Mary Jackson pers. commun.).

Folk history recounts that enslaved men and women weaved African coiled baskets to fan rice in order to separate the grains from the chaff. After the Emancipation Proclamation in 1863, former slaves were dedicated to preserve the African traditions of their ancestors. A reaffirmation of this goal has been made by each generation of the descendants of enslaved Africans and sweetgrass basketry is a symbol of this devotion.

Sweetgrass (Muhlenbergia filipes Curtis, Poaceae) was first identified and described botanically by Moses Ashley Curtis in 1843 and later by Pinson (1971). There is still a dispute as to whether sweetgrass should be identified as a variety of Muhlenbergia capillaris or remain a distinct genus and species (Rosengarten 1987). There is a lack of concise, comprehensive descriptive information on this species (Pinson and Batson 1971.)

Sweetgrass grows in bands about 50 to 75 m from the mean high tide line in undulating sand dunes usually behind the first dune along the ocean from North Carolina to Texas. Occasionally, plants are found growing on well-drained, sandy uplands bordering brackish marshes and in open maritime forests (Pinson and Batson 1971). Sweetgrass grows on many of the barrier islands along South Carolina's coast, such as, Kiawah, Seabrook, Dewees, Bulls, Fripp, and Hilton Head.

Rosengarten (1987) has provided an excellent review of basketry technique. Coiled basketry involves sewing or stitching unlike other types of baskets that are woven. Each basket begins with a small knot of long-leaf pine needles (Pinus palustris Mill.) or the fine-threaded sweetgrass. Pine needles may be used throughout the basket to provide a russet color that contrasts well with the more yellow sweetgrass. Coarse, thicker gauge black rush (Juncus roemerianus L.), also known locally as "bulrush, rushel, or needlegrass", may be added to the inside of the baskets for strength. Black rush turns a rich tawny color when dried. Strips of palm leaf (Sabal palmetto Lodd.) are used to sew the rows of coils to each other. A hole for the palm strips is made with a bone (a spoon with the bowl removed and the end smoothed and polished), nail, or bagging needle. Shape of the baskets is created by building upon the foundation, one row at a time and then row upon row. The coils of material must constantly be fed with new grasses to maintain a constant foundation of uniform thickness. The strength of the basket depends on how firmly the stitches are pulled. Today, baskets of great variability are constructed by modifying the amounts of these materials to create subtle changes of tone and radical change of texture.

The development of South Carolina's barrier islands and beach fronts has increased the areas economic prosperity and tourism which has been helpful to the basketmakers. However, changes in land ownership, land use and lifestyles have destroyed many plant communities or restricted access to remaining local sweetgrass habitats. Expensive and long journeys to Georgia or Florida are now necessary to gather raw materials. Political help is needed to preserve and protect natural sweetgrass habitats from destruction. Research is needed to learn how to domesticate this wild plant and cultivate sweetgrass as a row crop.

The traditional basket stands along the Ocean Highway are being unintentionally forced out of the community by construction of shopping malls and business parks with road frontage along the highway. These stands have been located on this highway for over 60 years. The display of African baskets has been a major source of income for many basketmakers as well as providing tourists an appreciation of the beauty, significance, and value of this ancient art form. The danger in displacement from traditional marketing areas is that basketmakers would have very few alternatives to sell their baskets in highly visible locations. This frustration may require them to seek other sources of income and cause a loss of basketmakers from the community.

The Mt. Pleasant basketmaking community has become known throughout the United States and abroad for their art. Today, the baskets have become a symbol of coastal South Carolina. The downtown area of Charleston has over 2,000 buildings registered with the Historic Society, yet basketmaking is truly the only "live" viable symbol or relic of the extinct plantation days of colonial times. After 300 years, this tradition, as well as historic buildings, are the trademarks of Charleston. Postcards and photographic illustrations commonly depict basketmakers and their art. African coiled basketry are objects of scholarly research and commonly are featured in newspaper and magazine articles in the United States and abroad. Sweetgrass baskets are displayed in art galleries, traveling exhibits, and have been displayed in the Smithsonian, Vatican, and Gibes Art Museum in Charleston and other museums.

In 1988, the Mt. Pleasant Basketmakers' Association was formed. The function of the Association is to organize the basketmakers into a cohesive group and to form a common voice to influence the management of their resources. The Association's purpose is to promote, preserve, and protect the tradition of sweetgrass basketmaking.

The first Sweetgrass Basket Conference was held on March 26, 1988 to discuss the basketmaking tradition, biological assessment and ecology of sweetgrass resources, impact of coastal development and public and private concerns in relation to the basket industry (McKissick Museum 1988). Through the activities of the Conference, many immediate pledges of public and private aid were offered.

In October, 1988, the Town Council of Mt. Pleasant resolved to make preservation of the basket stands a goal of the zoning process. In December, 1991, the Sweetgrass Preservation Society was formed by the Mayor of Charleston to help the basketmakers work on strategies to help protect and preserve their craft and tradition. 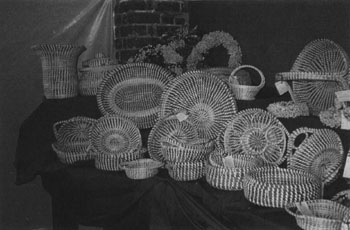