Domestication and Introduction of Marula (Sclerocarya birrea subsp. Caffra) as a New Crop for the Negev Desert of Israel

Marula (Sclerocarya birrea subsp. caffra, Anacardiaceae) is a large dioecious deciduous tree found in southern Africa, mostly south of the Zambesi river (Palgrave 1984). The tree is highly prized by local people for its fruits. Female trees bear plum-sized stone fruits with a thick yellow peel and a translucent, white, highly aromatic, sweet-sour flesh which is eaten fresh, or used to prepare juices and alcoholic beverages. The seeds inside the stone are also eaten they have a delicate nutty taste and a high nutritive value and high (up to 56%) oil content (Shone 1979).

Recently, an effort has been made to domesticate the tree in southern Africa and Israel in order to establish orchards that will supply both fresh fruit and fruit for the canning and beverage industry (Fig. 1) (Weinert et al. 1990; Nerd et al. 1990). This paper describes plant performance in four introduction orchards established at different locations in the Negev Desert of Israel and postharvest physiology of the fruits.

About thirty plants were planted in each orchard, in six blocks at Ramat Negev and in three blocks at the other plots. The plants were drip fertigated every one or two days in the summer and every three to five days in the winter. In the fourth year, the amount of water supplied was determined according to the evaporation rate (pan class A), and the plant cover, was 17 m3 per tree per year at Besor and Ramat Negev and 25 m3 per tree per year at Neot Hakikar and Qetura. At Ramat Negev, brackish water was applied to three of the blocks after two years of establishment with fresh water and the other three were irrigated only with fresh water. Growth and phenological data were recorded periodically for each orchard. Fruits collected at Qetura were used for postharvest physiology studies.

The height of four-year-old plants was much greater at Qetura and Besor than at Neot Hakikar and Ramat Negev. Trunk circumference (30 cm above trunk base) usually correlated with tree height, except for the plants at Ramat Negev whose circumference was larger than the value predicted from the height (Table 1). The small size of the plants at Ramat Negev may have been related to frost damage. After one night in February 1989, when temperatures fell to -7°C, all the branches died almost to the base of the trunk. However, all plants resumed growth the following summer (dead portions of branches were cut back in the spring), and the trees tended to develop more than one main stem (Table 1). The recovered plants also produced sprouts from roots close to the base of the tree. This phenomenon coincides with that manifested in another of our studies, which showed that marula root cuttings prepared in the summer easily developed new shoots. Although climatic conditions are similar at Qetura and Neot Hakikar and both sites were irrigated with brackish water, growth at Qetura was more rapid than that at Neot Hakikar. This finding can be related to the higher Ca2+/Na+ ratio in the water at Qetura (1.2 at Qetura versus 0.8 at Neot Hakikar), which probably moderated the retarding effect of salinity on growth. Brackish water irrigation of two year-old-trees at Ramat Negev did not inhibit their growth. These results together with those obtained at Neot Hakikar and Qetura indicate that marula has tolerance to salinity of ~4 dS.m-1.

Breaking of winter dormancy (late spring, April-May), occurred earlier at the warmer sites, Qetura and Neot Hakikar, than at the cooler sites, Besor and Ramat Negev (Fig. 2). It is of interest that the initiation of seasonal growth in common deciduous fruit trees such as peaches and apples in the Besor area took place 1 to 2 months earlier than that in marula.

Leaf abscission started in December in all the orchards. Plants at the cooler sites lost all their leaves within a few weeks, but those at the warmer sites maintained up to 50% of the leaves until the next summer. Although the breaking of dormancy can be retarded in deciduous trees that have not shed all their leaves in the winter (Saure 1985), we did not find any inhibition of breaking of bud dormancy in trees at the warm sites.

Yields were obtained only from the trees at Qetura. Eight of 20 trees planted in 1985-86 produced fruits, five giving reasonable yields in 1990, with an average yield of 26.8±10.4 kg and an average fruit weight of 28.3±2.5 g. These fruits are relatively small in comparison with those obtained from some selected trees in Botswana and South Africa, where average fruit weight may reach 80 g (F.W. Taylor and L.C. Holtzausen pers. commun.).

Marula fruits abscise before ripening; at this stage the skin color is green and the fruit is firm. Time of fruit abscission varied among trees at Qetura. Of the eight yielding trees, fruits abscised mainly in August in six trees and in late October in the other two. This can be attributed to genetic variation, which can be exploited for expanding the harvest period by planting clones that ripen at different times. The pattern of fruit abscission differed among trees, but in all the examined trees, 80% of the fruits abscised within two weeks (Fig. 3).

Production of CO2 and ethylene was studied in marula fruits collected immediately after abscission. The fruits were enclosed in an air flow system kept at 20°C, and samples of exiting air were analyzed for CO2 and ethylene concentrations by gas chromatography (Mizrahi 1982).

The respiration rate (CO2 production) increased to a temporary peak on day 9, and ethylene production rose concomitantly with the rise in respiration (Fig. 4). Skin color started to change on day 3, and a completely yellow color was obtained by day 12. These results indicate that climacteric processes start after abscission.

Ripening of abscised fruits was affected by storage temperatures. After 14 days of storage, fruits kept at 4°C remained green and firm, while those kept at 12° and 20°C developed a yellow color and could be squeezed for juice (Table 2). Fruits stored at 20°C were riper than those kept at 12°C: they had a deeper yellow color, a higher juice content, and lower acidity. The fruits stored at 4°C for 14 days were damaged by low temperatures: brown spots developed on the green skin within five days when they were transferred to 20°C and off-flavor taste developed.

Marula was established well at various sites in the Negev Desert, differing in environmental conditions. Brackish water (EC ~4 dS.m-1) can be used to irrigate the crop, and warm winters (mean temperature of the coldest month is 15°C) do not limit the breaking of winter dormancy. Cultivation at sites with subfreezing temperatures may not be feasible since branches may be damaged by frost events (-7°C). However, it is possible that hardening the trees before winter by withholding irrigation may increase their tolerance to cold and thus enable cultivation at such sites.

Trees started to bear fruits in the fourth year, and reasonable yields (above 20 kg per tree) were obtained one year later. Full ripening (climacteric type) occurs after abscission, and fruits can be stored for two weeks at 20°C and longer at 12°C, while low temperatures (4°C) damage the fruits.

*The authors express their thanks and appreciation to Ehud Tzeeri from Neot-Hakikar, Elaine Soloway from Kibbutz Qetura, Rafi Rotem from the Besor Experimental Station, David Itzhak from the Ramat-Negev Experimental Station, Eyal Naim of the Institutes for Applied Research for their skillful help in this research. This research was partially supported by the following agencies: US-AID CDR; GIARA-Germany-Israel Agriculture Research Agreement; Moriah fund and the Israeli Minitry of Agriculture. Table 1. Plant performance of four-year-old marula treesz.

zValues for height and trunk circumference are means ±SE for 30 plants.
yData for plants irrigated with fresh water and those irrigated with brackish water were combined, since plants of the two treatments did not differ significantly in size.

Table 2. Characteristics of fruits stored at various temperatures for 14 daysz.

zValues are means ±E for 10 fruits. Fruit fresh weight ranged between 20 and 38 g.
yColor was estimated visually using a scale of 1 to 4, where 1 = pale green, 2= green-yellow, 3 = pale-yellow, 4 = deep yellow.
xFruits remained firm and juice could not be squeezed out. 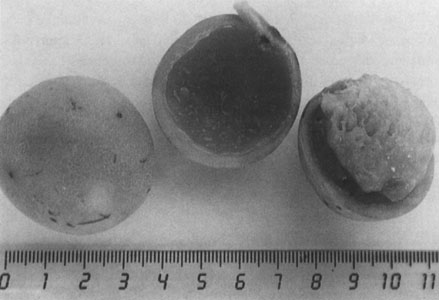