Chinkapins, also spelled chinquapins and sometimes called dwarf or bush chestnuts, are shrubs and small trees commonly found throughout the East, South, and Southeast. They are characterized by usually bearing one nut per bur and having burs that open into two halves like a clam shell. Some taxonomists and geneticists have separated the chinkapins into eight or more poorly defined taxa based on growth form, leaf morphology, bur characteristics, habitat, and blight susceptibility (Jaynes 1975; Graves 1950, 1961; Ashe 1923, 1924). These include: Castanea pumila (L.) Mill., C. ozarkensis Ashe, C. ashei (Sudw.) Ashe, C. alnifolia Nutt., C. floridana (Sarg.) Ashe, C. paucispina Ashe, C. arkansana Ashe, and C. alabamensis Ashe. Other taxonomists (Tucker 1975; Johnson 1987, 1988) have reduced most of these taxa to synonymy within C. pumila var. pumila and indicate that the chinkapin is but a single species, C. pumila, comprising two botanical varieties: vars. ozarkensis (Ashe) Tucker and pumila. Only the Allegheny chinkapin, C. pumila var. pumila (Terrell 1977) is discussed in this report.

The Allegheny chinkapin, also called the American, common, or tree chinkapin, may well be our most ignored and undervalued native North American nut tree. It has been widely hailed as a sweet and edible nut; a wood source for fuel, charcoal, fence post and railroad ties; and a coffee and chocolate substitute (Porcher 1970; Gillespie 1959). In addition, the tree's root has folkloric history as an astringent, a tonic, and a febrifuge (Krochmal and Krochmal 1982). However, chinkapin's great potential lies in its value to commercial chestnut breeding programs and as a source of food and cover for wildlife (Halls 1977; Jaynes 1979; Bailey 1960).

Castanea pumila var. pumila can be characterized as a large, spreading, smooth barked multistemmed shrub, 2 to 4 m tall, occasionally single stemmed and 5 to 8 m tall. Large trees are sometimes found, especially under human intervention when some of the competing trees have been removed. According to Bailey (1960), C. pumila attains a height of 15.2 m; however, the National Register of Big Trees (Pardo 1978) lists its two C. pumila record specimens at 12.5 and 12.8 m in height. Johnson (1988) reports an individual tree from Liberty County, Florida that was 15 m tall with a 1.1 m diameter at breast height.

The Allegheny chinkapin is found in dry sandy woods and thickets from southern New Jersey and Pennsylvania to Kentucky and Missouri, south to Florida and Texas (Fig. 1). According to Hooker (1967), C. pumila is rare and widely scattered in the extreme eastern counties of Oklahoma on dry, rocky or gravelly ridges, or silicious uplands.

In Georgia, bud break normally occurs during the last week of March or the first week of April. The leaves are borne alternately along the slender pubescent to glabrescent reddish brown twigs. The simple leaves are acute, elliptic to obovate, 4.1 to 21.7 cm long, 1.5 to 8.3 cm wide, bright yellowish-green to light green and glabrous above, whitish and densely tomentose beneath. The leaf margins are coarsely serrate and bristle tipped and the petiole is stout and glabrous but can be pubescent. There is much variation among leaves in shape, size, color, and pubescence even when growing on the same tree (shrub).

In Middle Georgia, pollen shed of the unisexual male catkins normally occurs during the first week of May. The pistillate flowers of the bisexual catkins are normally receptive during the second week of May, several days before the staminate flowers of these bisexual catkins shed pollen. This type of blooming sequence or maturation of flowers has been called duodichogamy and hetero-duodichogamy (Stout 1928; Vilkomerson 1940). Chinkapins are rarely self-fruitful and cross pollination is necessary to ensure a good nut crop. However, Morris (1914) reported that plants of C. pumila may set viable seeds without pollination. This apomictic behavior has been reported in Chinese chestnuts by McKay (1942).

The Allegheny chinkapin is normally ready for harvesting in early September. Harvest must be prompt in order to gather nuts before wildlife (birds and small mammals) remove the entire crop (Fig. 3). One single brown, lustrous, rounded nut is contained in each spiny green involucre (bur) (Fig. 4). The burs of chinkapin are normally no more than 1.4 to 4.6 cm in diameter and split into 2 valves at nut maturity. In contrast to other chestnut species, chinkapins normally remain attached to the bur at the hilum for several days after the bur has opened. Also, the burs and catkins do not abscise at harvest time, but remain attached until later in the fall or even until the following season. On each catkin, the more basal burs usually ripen before the more distal ones. These characteristics make chinkapins very difficult to harvest. The burs cannot be shaken or easily picked from the trees. After the burs open, but before the nuts fall, the exposed nuts are tempting morsels for birds or climbing mammals. Even at the peak of harvest, shaking a chinkapin branch will bring down only a small percentage of its crop, since half of the nuts are already gone, and the other half have not opened yet. If the unopened burs are cut or torn from the branches, very few of them will subsequently open, with most requiring a tedious threshing. Complicating the harvest and subsequent use is the fact that chinkapins are fall germinating. Often the radicle emerges while the nuts are still on the tree. Some of the chinkapin clones from isolated sites in Georgia bear nuts averaging 480/kg (fresh weight); however, the normal range is 800 to 1,320/kg (Fig. 5). According to Bailey (1960), C. pumila has been marketed in considerable quantities and for more than two centuries (Woodroof 1979); however, we seldom see mention of chinkapins for sale in any recent state market bulletins.

Yield estimates are difficult to ascertain, as commercial plantings are practically nonexistent. However, nurseries have established this species for seeds and breeding research. Yield extrapolations from a 6 row planting of 30 trees of C. pumila in southeastern Kentucky with a spacing of 3 m between trees and 6 m between rows would give 1,230 kg/ha in the 12th year and 3,100 kg/ha in the 14th year. These yields are lower than expected due to fall germination and adherence of nuts in the bur. Yield was also measured from a 7-year-old, closely-spaced (1 x 2 m) planting of seedlings in east central Ohio. The planting had reached crown closure, but had not yet suffered much branch loss due to shading. Individual tree yields varied considerably from nothing up to 1 kg or more. Average yield from trees in the middle of the planting was 5,000±1,500 kg/ha. This yield equals or exceeds the level expected for other chestnuts. In other words, the prolific production of chinkapins compensates for their small size.

Chinkapins are susceptible to Phytophthora cinnamomi root rot (Crandall et al. 1945). The Allegheny chinkapin is reported to be rather resistant to the chestnut blight fungus caused by Cryphonectria (Endothia) parasitica (Murr.) Barr (Chandler 1957); however, diseased and heavily cankered trees have been found in Georgia and Louisiana (Wallace and Peacher 1970). Chinkapins blight to some degree, but they continue to sucker and send up shoots from the root collar and, despite cankering, produce fruit. Castanea pumila has been widely used in the breeding programs for blight resistance (Graves 1950; Jaynes 1975). 'Alamoore', a C. crenata x C. pumila, was introduced in 1952 by the Alabama Agr. Expt. Sta. because it was blight resistant, prolific, and early bearing (Brooks and Olmo 1972). According to a blight researcher (S. Anagnostakis pers. commun.) the chinkapin hybrids are as susceptible to chestnut blight as American chestnuts, C. dentata (Marsh.) Borkh., based on inoculation tests with two strains of Cryphonectria parasitica.

According to Bailey (1960), two cultivars of C. pumila, `Fuller' and `Rush', have been named, but neither is listed in Register of New Fruit and Nut Varieties (Brooks and Olmo 1952, 1972). In 1983, the Soil Conservation Service and the University of Kentucky Agricultural Experiment Station and Kentucky Department of Fish and Wildlife jointly released `Golden' for commercial production.

Our native Allegheny chinkapins are prolific producers of sweet, nutty flavored, small chestnuts (Table 1). They have attractive foliage and flowers, although the odor at blossoming time is considered unpleasant by some. If the sweetness, texture, and flavor could be incorporated into the Japanese chestnut or the Chinese chestnut there would be a greater demand for uncooked chestnuts (Jaynes 1979). If the suckering could be eliminated, it may have promise as a dwarfing rootstock for choicer cultivars of chestnut (Bailey 1960) and should be broadly adapted since the Allegheny chinkapin occurs across a wide geographic range. The great drawback of the American chestnut was its small nut size and the added disadvantage that many nuts stuck fast in the bur at harvest and had to be removed by force (Smith 1950); the same can certainly be stated for the Allegheny chinkapin (Table 1). Because the nuts are small, difficult to harvest, and germinate at harvest time, chinkapins have limited potential as a commercial crop. However, their small tree size, precocity, and heavy production may be useful characteristics to breed into the commercial chestnut species. These chinkapin characteristics will facilitate the development of high-density chestnut production systems with earlier and higher yields than is possible with existing chestnut cultivars.

Since the chinkapin is adapted to a wide range of soils and site conditions, it should be considered for its wildlife value. The nuts are eaten by a number of small mammals such as squirrels, rabbits, deermice, and chipmunks, (Halls 1977). By cutting the stem at the ground surface, dense thickets can be established within a few years to provide food and cover for wildlife, especially grouse, bobwhite, and wild turkey.

A renowned horticulturist once remarked, "To hear about the attributes of the Allegheny chinkapin makes your mouth water but to see it makes your eyes water." According to Fuller (1896), "From present indications this tree will be well worthy of cultivation as an ornamental shade tree, even if we leave out of the account its rapid growth, productiveness, and delicious little nuts, which will be very acceptable for home use, if not, possessing any great commercial value." Ninety-six years later the economic potential of this crop still remains to be adequately demonstrated. 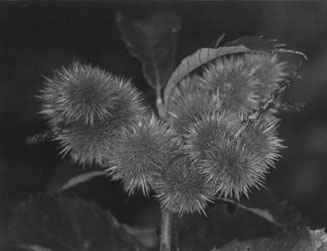 Fig. 3. Chinkapins normally bear 1 to 5 spiny burs per spike; however, 5 to 8 burs or more are encountered. 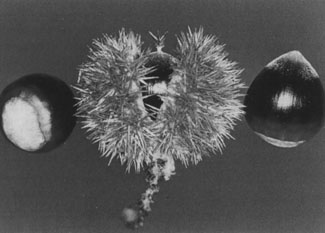 Fig. 4. Chinkapin nuts are 7 to 19 mm in diameter, chocolate to blackish brown, ovate, pointed at one end, and are enclosed in a spiny bur 1.4 to 4.6 cm in diameter. 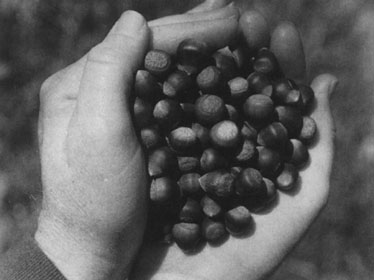 Fig. 5. Chinkapins are precocious and prolific with yields of 2 kg per plant in 6 to 8 years.