Saskatoon Berry: A Fruit Crop for the Prairies

The saskatoon (Amelanchier alnifolia Nutt., Rosaceae) is a fruit bearing shrub native to the southern Yukon and Northwest Territories, the Canadian prairies and the northern plains of the United States (Harris 1972). It is extremely adaptable and grows under a wide range of environmental conditions. Saskatoon plants begin to bear fruit when they are two to four years old and with proper management can yield 8 to 10 tonnes of fruit per hectare (Harris 1972; St. Pierre 1991). The fruit, usually called a berry, is actually a pome. Saskatoon berries were originally used as a major food source by the native people and early settlers of the North American prairies and, until recently, could be picked only in the wild (Harris 1972). In the past two decades, however, there has been increasing interest in utilizing this berry as a unique western Canadian fruit crop. Today, there are 100 to 200 ha of saskatoons on the Canadian prairies in production and 200 to 400 ha planted but still too young to produce significant quantities. Many of the most profitable orchards are near urban centers where a pick-your-own system is used to harvest and market the berries. Plants have access to irrigation and are grown under favorable environmental conditions to ensure high fruit yield and quality.

Many cultivars have been named by horticulturists over the years. These have been primarily chance seedlings that have been selected for superior plant and/or fruit characteristics. Currently, 'Smoky' is recommended for production of good quality, medium-sized fruit, and 'Honeywood' for large fruit of fair quality. Other cultivars include: 'Forestburg', 'Moonlake', 'Northline', 'Parkhill', 'Regent', 'Success', 'Porter', 'Thiessen', 'Altaglow', and 'Sturgeon'. 'Smoky', the most widely grown cultivar, has medium-sized, fleshy, round, sweet, mild-flavored fruit growing in clusters (Fig. 1). Selected physico-chemical characteristics of five cultivars are listed in Table 1.

Saskatoons can be propagated from seed, divisions, root cuttings, softwood cuttings, and cuttings from etiolated shoots (Nelson 1987). In vitro propagation of 'Northline', 'Pembina', 'Smoky', and 'Thiessen' saskatoon berries has been reported (Harris 1980; Pruski et al. 1990). However, rooting and post-rooting dormancy remains a problem for some cultivars. Growing saskatoons from seed is relatively simple, but plants grown from seed differ from parent in size and fruit characteristics (Davidson and Mazza 1991).

A comparison of plantings in sandy loam vs clay loam indicates much better success in the former. A slight slope to provide for both air and water drainage is also important. This is in agreement with the natural habitat of the saskatoon which is often found in sandy and other well drained locales.

Row planting in contrast to spaced single plants has led to the best plant establishment and growth. Rows planted 3.5 to 4 m apart with plants 1 m within rows led to a high plant population with abundant in-row suckering. Over the row mechanical harvesters require a minimum of 5 m, while pull-type harvesters require 6 m spacing.

Irrigation under normally dry prairie conditions is essential for plant establishment, and to maximize growth and fruit yield. Both trickle and overhead irrigation systems are acceptable. While trickle irrigation is generally more economical and efficient, particularly with wide row spacing, overhead irrigation can provide frost protection and crop cooling. While fertility requirements have not been investigated, fall applications are not recommended since these may reduce winter-hardiness of plants.

Row cultivation can give relatively easy weed control if long rows are used at a spacing which enables use of various size cultivators as the planting grows. Currently, only the herbicide linuron is registered for use in saskatoon production in Canada. On an experimental basis, pre-plant incorporated trifluralin at 2.2 to 4.4 kg ai/ha provided excellent control of weeds at planting. Post-plant dormant application of linuron has provided nearly full season control of annual grasses and broad leafed weeds. Fall application is preferred. Spring application must be made prior to budbreak and must be followed by rain or irrigation.

Saskatoon plants begin to bear fruit when they are 2 to 4 years old. The fruit is produced on the previous year's growth and on older wood. Usually young, vigorous branches yield the highest quality fruit. Pruning should be done in early spring after the danger of severe cold weather is past and before the plants start to grow. Removal of all weak, diseased, damaged and low branches as well as thinning of the center growth to keep it open is recommended. Generally, major pruning is not required until the plants are 6 to 8 years old.

Saskatoon fruit grows in clusters. The fruit ripens almost evenly and the whole crop can usually be picked at one time. Yields of up to 10 tonnes/ha can be obtained with proper management.

The nutritional value of saskatoon berries on a dry weight basis is listed in Table 2. Saskatoon berries contain higher levels of protein, fat, and fiber than most other fruit. Tuba et al. (1944) indicated that fresh saskatoon berries might be a useful source of vitamin C. Panther and Wolfe (1972), however, reported a negligible ascorbic acid content and that an ascorbic acid oxidizing enzyme system was present in the berries.

Total solids content ranges from 20 to 29.4% fresh weight with 15.9 to 23.4% sucrose and 8 to 12% reducing sugars (Mazza 1979, 1982). Wolfe and Wood (1971) found that the sugar content increases slowly as the fruit matures and then accelerates markedly before ripening. Their results also indicated that fructose content decreased rather markedly (25%) after the fruit ripened while the glucose content remained unchanged. Berry pH values range from 4.2 to 4.4 and titratable acidity values (% malic acid) from 0.36 to 0.49% (Mazza 1979; Green and Mazza 1986). The predominant acid in saskatoon berries is malic (Wolfe and Wood 1972) and the predominant aroma component is benzaldehyde (Mazza and Hodgins 1985). There are at least four anthocyanins in ripe saskatoon berries; cyanidin 3-galactoside accounts for about 61% and 3-glucoside for 21% of total anthocyanins (Mazza 1986).

The saskatoon berry is a very new commercial fruit, yet several food processors are already using wild and cultivated berries in their food products (Fig. 2). There seems to be considerable potential for expansion of production and processing of saskatoon berry as many processors and distributors have reported they would use large quantities of this unique fruit if they had an assured supply at a reasonable price. For successful mass production of saskatoons, however, consistently higher yields and quality and improved pest control are required. This can only be achieved through increased research efforts. 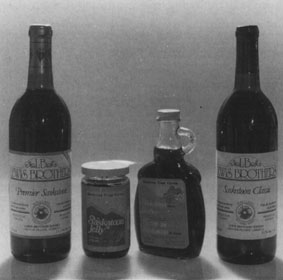