The Potential for Domestication and Utilization of Native Plums in Kansas

During the 19th century, Great Plains settlers demonstrated great interest in the domestication and utilization of North American plum species (Prunus spp.) (Bailey 1898; Goff 1897). In central and western Kansas, native plums represented the most reliable source of fresh fruit for many farm families (Kindscher 1987). By 1901, 305 native plum cultivars had been described, including 37 inter-specific hybrids (Waugh 1901). Interest in native plums waned during the 20th century, as mechanized farming and an increasingly efficient transportation system ushered in an age of agricultural specialization. By 1990, only five crops (wheat, maize, sorghum, soybeans, and hay) accounted for nearly 99% of the value of crops produced in Kansas (Byram 1990). Today, the decline in profits earned from producing traditional grain and forage crops has lead many farmers to search for new crops with greater profit potential. This search for agricultural diversification in the wheat belt has rekindled an interest in the domestication and utilization of native plums as a high value, speciality crop.

Prunus angustifolia can be found growing from Maryland to Florida in the east then westward to Kansas, Oklahoma, and Texas (Little 1977). The discontinuous distribution of P. angustifolia (Fig. 1) led Sargent (1965) to speculate that this species originated in the west and was moved eastward by native Americans and has since become naturalized in the southeastern United States.

Also known as the sandhill plum in Kansas (Stephens 1973), P. angustifolia forms large thickets in the sandy pastures of the central and western portions of the state. Large fruit size, small narrow leaves, and a dwarfed appearance led nineteenth century botanists to label the sandhill plum P. angustifolia watsoni, to distinguish it from the Chickasaw plum, P. angustifolia, common in southeastern states (Waugh 1903). Although modern botanists do not recognize the sandhill plum as a separate sub-species or botanical variety, the Kansas population of P. angustifolia seems uniquely adapted for growth in a climate characterized by high heat (40°C) and drought in summer and bitter cold (-30°C) in mid-winter.

The sandhill plum is a much-branched shrub usually less than 2 m high. Thickets up to 20 m across are quickly formed by root suckers. Bright yellow-green leaves that are folded lengthwise help make sandhill plum colonies easily recognizable in the prairies of Kansas. Leaves are simple, alternate, and narrowly elliptical. Twigs are slender, red, glabrous, and often end in a spine. Many branches grow in a distinctive zig-zag pattern. Small white flowers emerge in early April before leaf burst. Flowers have 5 white rounded petals, 20 stamens, and a single egg-shaped ovary. Fruits ripen from early July to late August. Fruits are globose, average 2.1 cm across, and vary in skin color from orange-yellow to deep red (Fig. 2).

In 1990, we initiated a study to measure the genetic diversity of P. angustifolia in Kansas by establishing a planting of 120 seedlings. Bushes used in this study were produced from seed collected from a native plum population located near Pratt, Kansas in 1988. Fifty-nine bushes produced their first fruit crop in 1991. Fruit weight varied from 2.6 to 13.8 g and fruit skin color from yellow to dark red. The orange-yellow flesh of sandhill plums contained from 9.0 to 19.4% soluble solids and were highly acid averaging pH 3.2.

Fruit was harvested from our seedling planting from July 3 to Sept. 11 with the majority of fruit harvested during late July and early August. The harvest season per bush varied from 1 to 7 weeks and averaged 3.6 weeks. The heaviest yielding bushes had the longest harvest season and produced over 4 kg of fruit.

Bush form varied widely. In the year prior to our first fruit crop, bushes could be easily rated as either prostrate, spreading, bushy, or upright. Precocity in sandhill plum seems closely associated with the prostrate growth form. The highest yielding bushes in the first year of fruiting were those that grew nearly horizontally (Fig. 4) but this growth form is the least desirable horticulturally. Fruit-laden limbs dropping on the ground were more prone to fruit rots and were difficult to harvest.

Evidence of bacterial spot infection caused by Xanthomomas campestris pv. pruni (Smith) Dye could be found on all bushes in the planting. Disease severity increased with fruit yield because of the negative influence of fruit production on vegetative growth. Those bushes with little or no fruit crop were able to outgrow the spread of the bacterial infection.

Observations of the small sample of sandhill plum germplasm described above indicate that sufficient genetic diversity exists within the species for rapid crop improvement. Increased fruit size and higher soluble solids would lead the list of objectives for developing sandhill plum cultivars suited for the processing industry. Additional crop improvement objectives should include a condensed ripening season, an upright growth form, and resistance to bacterial spot.

A limited search of rural Pratt County, Kansas identified two thickets of that produced ample quantities of sandhill plums averaging 2.6 and 2.7 cm in diameter. A more detailed search should yield a sufficient number of superior individuals to begin screening for possible commercial cultivars.

Prolific root suckering by P. angustifolia will make the commercial culture of this plum on its own roots impractical. Fortunately, P. angustifolia is graft-compatible with many of the non-suckering rootstocks that have been developed for other diploid plum species (Okie 1987). Growth and yield responses of sandhill plums propagated onto these Prunus rootstocks are not documented.

The sandhill plum is susceptible to many of the same pests that attack commercial peach and plum orchards. Plum curculio, Conotrachelus nenuphar Herbst, is the primary insect pest of sandhill plum. Fruit drop and fruit damage caused by this insect must be controlled if commercial plantings of the sandhill plum are to be successful. Major disease problems include brown rot [Monilinia fructicola (Wint.) Honey] of the fruit and bacterial leaf spot (Xanthomonas campestris pv. pruni (Smith) Dye). There seems to be little natural resistance to either of these diseases within P. angustifolia. However, bacterial spot resistance has been identified in P. cerarsifera Ehrh. (Byrne 1989).

Chemical controls for the major pests of sandhill plum are widely available. Since sandhill plum is legally a plum, growers may apply any pesticide registered for use on European and Japanese plums for control of insect, disease, and weed pests.

Acceptance of sandhill plum as a crop in Kansas would depend in part on the availability of mechanical harvesting equipment. Fortunately, the dimensions and growth habit of the sandhill plum are close to those of the highbush blueberry. Harvesters developed for the blueberry industry should be easily adapted to sandhill plum harvest.

Sandhill plum jelly has been a regional favorite ever since the early settlers discovered abundant plum thickets on the Kansas prairie (Kindscher 1987). Until recently, sandhill plum jams and jellies were produced only in rural family kitchens for home consumption. With the rapid rise of consumer interest in regional and/or speciality foods, two Kansas food companies have begun manufacturing sandhill plum products for distribution nationally. Fruit is collected from uncultivated thickets and purchased for $1.10/kg. Products manufactured from the sandhill plum are marketed as uniquely Kansan and command as much as $17.50/kg.

Sandhill plums make distinctive fruit products that are often described as pleasingly tart with an apricot-like flavor. Besides the traditional jams and jellies, four additional Sandhill plum products have been developed by the Value-Added Center at Kansas State University. These include a pancake syrup, a fruit topping for ice-cream, a naturally sweetened fruit spread, and an artificially sweetened fruit spread. The manufacturing process for all six Sandhill plum products is outlined in Fig. 5.

Continued expansion of the sandhill plum industry will depend on the domestication of P. angustifolia. The rich genetic diversity found both within this species and among all native Kansas plums offer tremendous opportunities for crop development. Improvements in fruit size, soluble solids, and bush form can be made rapidly through careful examination of seedling populations. The domesticated Sandhill plum of the future is envisioned as a bush fruit adaptable to mechanical harvest with technology borrowed from the blueberry industry. Successful domestication and market development will provide Kansas farmers with an additional crop and allow them to reap the economic benefits of agricultural diversification.

Fig. 1. The distribution of Prunus angustifolia in North America (Little 1977). 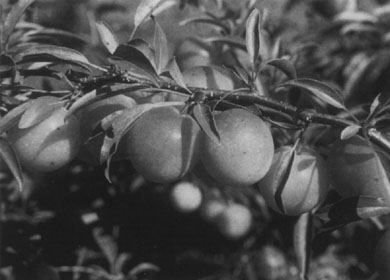 Fig. 2. Sandhill plum fruits are borne in clusters of 1 to 3. The fruits pictured here were light orange with a red blush and averaged 2.5 cm in diameter.

Fig. 4. The relationship between bush shape and fruit yield among 120 sandhill plum seedlings.