The success of an allopolyploid, whether natural (Brassica napus L., Nicotiana tabacum L., Triticum aestivum L.) or synthetic (triticale, hakuran) is based in part on the variability within the original parent individuals (Dewey 1980). The genus Brassica, is a classic example of allopolyploid speciation (Fig. 1); it is extremely diverse in morphology encompassing many economically important crops. The natural allotetraploid B. napus has been produced from its diploid progenitor species (B. oleracea L. and B. rapa L.) by sexual interspecific hybridization for the development of the leafy vegetable crop 'Hakuran' (Nishi 1980), and by somatic hybridization (Jourdan et al. 1989) in attempts to transfer various nuclear and cytoplasmic traits between the species. This makes B. napus a model system for a comparison of sexual and somatic hybridization systems for the development of new crops.

Diploid cells used in somatic hybridization are not subject to the allelic segregation found in gamete formation nor the unilateral inheritance of cytoplasm as generally seen in sexual hybridization; therefore, somatic hybrids should retain any heterozygosity of the parents and allow for rearrangement of cytoplasm. The use of highly heterozygous parents in somatic hybridizations could incorporate high degrees of variation in the offspring (= F2) of a single somatic hybrid not possible with sexual hybridization. Relatively homozygous lines have generally served as parents to resynthesized B. napus, thus impeding the exploitation of the high morphological variability within the parental species. Such variation is essential for new crop development and therefore requires that hybrids be produced from several different parent combinations in order to provide sufficient variation for cultivar development of a new crop.

The current study was designed to maximize the heterozygosity in a population of resynthesized allotetraploid B. napus, so as to maintain high variability in subsequent generations for the development and breeding of new crops. The primary objectives are to provide novel and supplemental variation for breeding vegetable-type B. napus, and to determine which method of resynthesis, sexual or somatic, would be more effective for doing so.

Intraspecific F1 hybrids between cultigens within the diploid progenitor species (B. oleracea and B. rapa) were produced by bud pollination in the greenhouse (Fig. 2). Each vegetable parent [cauliflower (B. oleracea ssp. botrytis), turnip (B. rapa ssp. rapifera), and chinese cabbage (B. rapa ssp. pekinensis)] was selected for its distinctive morphological character whereas purple ornamental kale (B. oleracea ssp. acephala) was selected for its excellent regeneration from protoplasts. All cultigens had yellow flowers except cauliflower's which were white.

Production of Somatic Hybrids (R0) and Their F2 (= R1) Populations

Production of the somatic hybrids followed standard protocols (Jourdan et al. 1989). Leaf tissue served as the protoplast source for somatic hybridization involving individual B. rapa and B. oleracea species-parent plants (Fig. 2). The latter's protoplasts were treated with iodoacetate prior to fusion by the polyethylene glycol method.

Somatic F2 seed from bud self-pollinations were started in the greenhouse from three Type 1 (see Results) somatic hybrids. Seeds of the diploid parental lines 7212 (B. oleracea) and 7442 (B. rapa) were also started. Five-week-old seedlings were transplanted at ca. 0.6 m intervals in rows 1.6 m apart on raised beds. Plants were evaluated for various morphological characters on a 1 to 5 rating scale [plant habit, branching, leaf shape, undulation, vesture, leaf crinkle (internal bubbling of the leaf), leaf color, and rib color]. Leaf shape was classified as described by Gomez-Campo (1980) ranging from lyrate to heavily lobed (divided). Approximately, 350 F2 plants from each of two somatic hybrids were used for frequency analysis.

Reciprocal interspecific bud pollinations were made between the same species-parent individuals used in the fusion experiment (Fig. 2) during the months of November and December, under natural lighting in the greenhouse. Thirteen to 18 days after pollination, ovules were aseptically removed from the silique and placed in the liquid medium (MSQ) of Quazi (1988) with the omission of tri-potassium phosphate. Cultures were incubated in dim light (60 µmol m-2s-1) on a gyratory shaker (33 rpm). Two to three weeks later, torpedo stage embryos were transferred to solid B5G1 medium [B5 media with 0.1 mg/liter gibberellic acid (GA3), 0.8% washed agar] and grown at 4°C with 8/16 h light/dark periods for 10 days. Once developed, shoots were proliferated on a modified solid Murashige and Skoog (MS) medium (B5 vitamins) with 0.2 mg/liter 6-benzylamino purine (BA) and then maintained on hormone-free MS medium until placement into soil. Sexual hybrids were identified by intermediate morphology and glucose phosphate isomerase (GPI) and phosphoglucomutase (PGM) isoenzyme banding patterns using cellulose acetate electrophoresis (Hebert and Beaton 1989).

Two types of somatic hybrids were produced (Fig. 2) and have been characterized previously (Ozminkowski and Jourdan 1991). Type 1 hybrids were uniform, vigorous, near-rosette in habit, with divided pubescent leaves, and white, fertile flowers. Flow cytometry analysis of nuclear DNA content indicated that these plants had a genome size similar to natural B. napus. Type 2 hybrids were variable in appearance, rugose, less vigorous, with distinct internodes, and near lyrate leaf shape; mature plants were nearly glabrous. These plants had low fertility and were chimeric (white and yellow) for flower color; flow cytometry data suggested that these plants had higher ploidy levels than natural B. napus making them less useful in a breeding program. No somatic hybrids were found to contain only the B. oleracea RFLP markers for either mitochondria or chloroplasts while many contained only the B. rapa markers. Several hybrids were found to contain the chloroplast and/or mitochondria RFLPs of both parents, suggesting either mixed or recombinant organellar genomes.

The somatic hybrids did not appear to be of any economic value per se. However, every somatic hybrid contained an allele at each locus from four diverse cultivated forms of Brassica allowing extensive segregation in the F2 generation; the production of F2 seed of the Type 1 hybrids was not a limiting factor.

Field-grown F2 plants of the Type 1 hybrids were uniformly vigorous. Distinct morphologies became apparent about 4 weeks after planting. The morphological variability seen in the F2 populations was sufficiently large to permit further intrapopulation crossing and selection for forms appealing to the consumer (e.g. glabrous, heading, good color). Several morphologies were found in the somatic F2 population which show potential for new plant development (Fig. 3). Variation in leaf morphology is illustrated in Fig. 4.

When individual plant characters were evaluated, most of the plants were intermediate between the two species-parents though the frequencies were skewed in favor of B. rapa; this may be a contribution of the predominantly B. rapa cytoplasm or of more dominant B. rapa nuclear alleles. However, somatic hybrids containing only B. oleracea cytoplasm were not obtained for comparison. Most F2 plants exhibited less extreme pubescence than the B. rapa parent, although several were seen with higher levels. Several glabrous plants were found, a character more favorable for marketing. Many plants displayed leaf undulation and crinkle more extreme than either species-parent. Plants with rib color that was much darker purple than either parent line were also found in this population. Leaf color was the only evaluated character to favor the blue-green B. oleracea parent. Only three F2 plants flowered within five months after planting, thus preventing the analysis of fertility and segregation of flower color (all three had white flowers).

Twenty-seven embryos produced sexual hybrid plants (Table 1). Most (19 of 27) hybrid embryos produced greater than 20 shoots allowing clones of 11 to be placed in the field. Each sexual hybrid was unique in morphology (Fig. 2 and 5), as would be expected since allelic segregation occurred during gamete formation. Hybrids were very vigorous both in the greenhouse and field. All sexual hybrids were pubescent. Only four hybrids, all field-grown, have flowered five months after transplanting and are segregating for flower color though all flowers were small and sterile. Analysis of organelle-specific RFLPs suggested only maternal inheritance of cytoplasm.

DNA quantification through flow cytometry indicate these plants are allodiploids and therefore must have their genomes doubled to restore fertility. The result should be fully homozygous, inbred lines containing only one allele from each locus of each species. Thus, only those types produced in the hybrid generation are available for continued development without the production of additional interspecific hybrids. Few if any sexual hybrids displayed an economically favorable morphology per se; no glabrous or heading type plants were produced. This may be due to the limited number of sexual hybrids produced, an inherent difficulty to sexual hybridization between these two species.

The parents used in the synthesis of a novel or natural allopolyploid crop should contain maximum levels of variation to provide a germplasm resource sufficient for the development of new forms with a minimal number of resynthesis experiments. Using Brassica, we have compared two methods of producing allopolyploid species, sexual and somatic interspecific hybridization, for the development of new vegetables. Many independent sexual hybrids were necessary to represent only a fraction of the variability observed in the F2 population of a single somatic hybrid produced from the same heterozygous parents. Since interspecific hybrids are often difficult to produce, maximal variability in fewer individual hybrids can be a tremendous savings in resources. Somatic hybridization can result in highly heterozygous hybrids and, in addition, offers the opportunity for novel organelle rearrangements which can lead to unique cytoplasmic male sterility systems (Jourdan et al. 1989); sexual hybridization generally produces hybrids containing maternal cytoplasm. Organelle analysis of the somatic and sexual hybrids produced in this study did support this hypothesis.

The availability of efficient techniques for protoplast regeneration and fusion in an increasing number of crops will allow plant breeders to choose between sexual and somatic hybridization for the production of interspecific hybrids based upon the individual breeding program objectives. We have shown in this study that, when a primary objective involves the production of new allopolyploid crops or to substantially increase the variability within existing allopolyploid species, somatic hybridization is the preferred method because high variability can be obtained among progeny from a single fertile somatic hybrid. The use of parent plants heterozygous for quantitative trait loci (QTL) involving yield or stress resistance permits combination of several alleles at each QTL in every somatic hybrid which would allow high genetic gain from subsequent selection. Conversely, if the objective is to introgress a simply-inherited trait into an existing crop, sexual hybridization may be preferred.

Table 1. Sexual F1 hybrid plants produced by hybridizations between B. oleracea and B. rapa via ovule culture.

Fig. 1. Nuclear genomic relationships among selected Brassica species (adapted from U 1935). Species at intersections of the triangle are the diploid progenitor species of the respective allotetraploid species upon each side. Lower case letters represent the species nuclear genome composition. 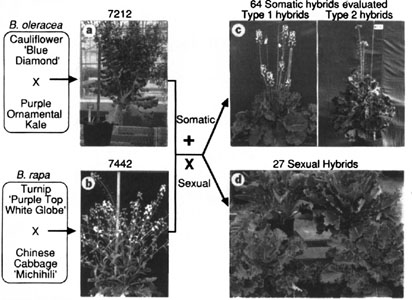 Fig. 2. Pedigree of (c) somatic and (d) sexual interspecific hybrids between (a) B. oleracea and (b) B. rapa. 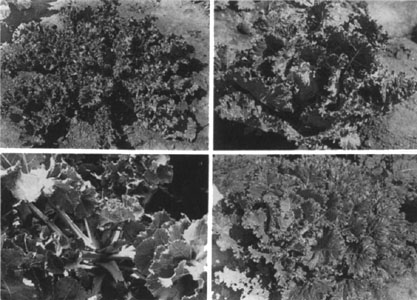 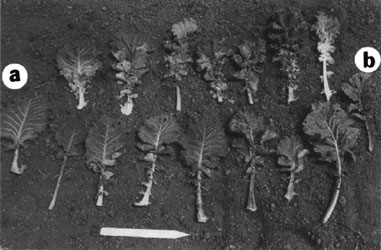 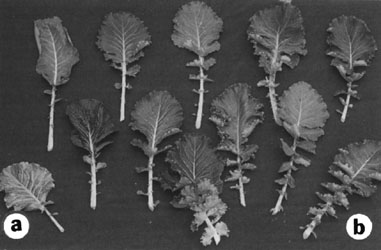 Fig. 5. Leaf variability among sexual hybrids between heterozygous B. oleracea a) and B. rapa lines. b) Type 1 somatic hybrid leaf.