Fennel: A New Specialty Vegetable for the Fresh Market*

Finocchio or Florence fennel (Foeniculum vulgare Mill. ssp. vulgare var. azoricum Mill. Thell, Apiaceae), is being marketed as "anise" in supermarkets throughout the United States. While many cultivars of fennel are grown for the aromatic seed and foliage, finocchio fennel is produced for the enlarged bulb (thickened leaf bases) (Simon et al. 1984). The bulbs are becoming increasingly popular as an specialty vegetable where the bulbs are either consumed raw or prepared by baking, blanching, or boiling. The bulbs are sold as "anise" because of the strong "licorice" or "anise" aroma. Increased consumption and demand for the fresh product offers expanded opportunities for American growers yet very little information is available for potential producers on production or varietal selection (Morales et al. 1991). Fennel, a perennial herb grown as an annual, has a tendency to bolt, a periodic problem with the splitting of the bulb and formation of excessive side shoots within the bulb. Yet, high quality bulbs should be firm, white, sweet, and whole with a minimum diameter of not less than 5 cm (Seelig 1974). The objective of this project was to evaluate fennel cultivars for yield and quality.

Commercial seed of ten fennel cultivars was sown on Apr. 4 of 1990 and 1991. Seedlings were grown in a greenhouse for 38 days and then transplanted to the field onto raised beds on May 11 in 1990 and May 14 in 1991. The experiment was planted in a completely randomized block design with three replications consisting of single row plots. Rows were 1 m apart, 15 cm between plants and 27 plants/plot in 1990 and, 10 cm between plants and 15 plants/plot in 1991. Plants (Fig. 1) were harvested on July 17 in 1990 and Aug. 2 in 1991. In late May and June of 1991, black swallowtail caterpillars (Pappio sp.) were observed feeding on the leaves of the young transplants and manually removed from the plants. The middle 13 plants from each plot were harvested and the roots from each plant discarded. Five representative bulbs per plot were selected for qualitative evaluation of quality and visual appearance (Fig. 2).

Significant variation among cultivars in bulb yield, bulb dimensions, days to 50% bolting, plant height, and number of side shoots was observed (Table 1, 2). The cultivar 'Zefa fino', from Royal Sluis and Johnny's Seed Company, was the highest in bulb weight, the lowest in foliage yield, and the second lowest in plant height, indicating an increased allocation of carbohydrates into the bulbs rather than to the foliage. 'Zefa fino' had significantly greater bulb circumference than the other cultivars (Table 1). Disease and insect damage to the bulbs was minimal and not different among cultivars (Table 2). Bulb width and circumference were correlated with bulb weight (Table 3).

'Zefa fino' also showed significant differences from the other cultivars in days to 50% bolting. The later maturity of this cultivar is highly desirable because a longer vegetative period permits the plant to produce larger and heavier bulbs. 'Zefa fino' had the lowest number of side shoots on the bulbs, an undesirable genetic trait among some cultivars.

The time from sowing in the greenhouse to harvest was 104 days in 1990 and 120 days in 1991; time from field transplanting to harvest was 67 days in 1990 and 80 days in 1991. Average growing season of direct seeded fennel in California ranges from 110 to 125 days (Seelig 1974). 'Zefa fino' had the greatest bulb weight and circumference. Because the width and thickness of finocchio fennel bulbs continues to increase over time (Suhonen and Kokkonen 1990), the determination of the optimum harvest period is difficult. While bulbs from all cultivars met the minimum requirement for bulb size (Seelig 1974), significant differences in visual appearance and shape suggests that genotype is very important in bulb quality. The most attractive appearance among the cultivars evaluated was 'Zefa fino', whose bulbs were white, firm, highly aromatic with no visual discolorations.

*Journal Paper No. 13,211, Purdue Univ. Agr. Expt. Sta., West Lafayette, IN 47907-1165. This research was supported in part by grants from the Indiana Business Modernization and Technology Corporation, Indianapolis, and the Purdue University Agricultural Experiment Station (Specialty Crops Grant No. 014-1165-0000-65178). We thank Tom DeBaggio and Jules Janick for providing us with some of the Italian germplasm. Table 1. Foliage and bulb means per plant of ten finocchio fennel cultivars grown in central Indiana for two growing seasons, 1990-1991.

Table 3. Correlations of plant characteristics from ten finocchio fennel cultivars grown in 1990 and 1991. 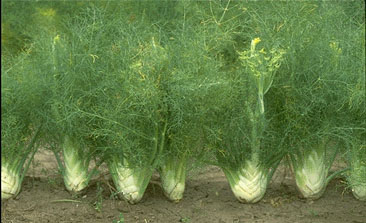 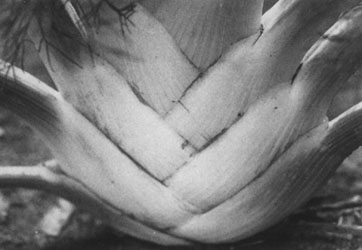 Fig. 2. Close-up of finocchio fennel 'bulb' cv. Zefa fino, comprised of thickened leaf bases formed at the base of the plant.