The New World genus Tagetes (Asteraceae) includes the popular garden marigold, Tagetes erecta L. Other members of the genus are equally easy to cultivate, and have a long history of human use as beverages, condiments, ornamentals, as medicinal decoctions, and in ritual (Diaz 1976; Morton 1981; Nuttall 1920; Neher 1968). Tagetes erecta is used as a beverage in South Carolina (Crellin 1984) and in parts of the southern United States (Linares and Bye 1987). Tagetes lucida Cav. is a popular beverage in Mexico and Guatemala, where it is also used as a medicinal tea and in ritual (Linares and Bye 1987; O'Gorman 1961). Tagetes minuta L., a species native to southern South America, is used as a condiment, as a refreshing beverage, and for medicinal purposes (Manfred 1947; Freise 1934; Parodi 1959; Thays 1910). In each case, leaves, stems, and flowers are utilized. In recent years, there has been an increasing interest in using the herbal products of indigenous peoples (Anjaria 1989). Tagetes minuta could be another new herb brought to the world market.

Tagetes minuta is native to the temperate grasslands and montane regions of southern South America, including the countries of Argentina, Chile, Bolivia, Peru, and in the Chaco region of Paraguay (McVaugh 1943; Reiche 1903; Perkins 1912; Herrera 1941; Espinar 1967). T. minuta is often found growing in disturbed areas during early successional stages. This affinity for disturbed sites has allowed the species to colonize many areas around the world. Since the time of the Spanish Conquest, it has been introduced into Europe (Jordano and Ocana 1955), Asia (Cherpanov 1981), Africa (Hillard 1977), Madagascar (Humbert 1923), India (Rao et al. 1988), Australia (Webb 1948), and Hawaii (Hosaka 1954).

Tagetes minuta is an erect annual herb reaching 1 to 2 m (Fig. 1). Leaves are slightly glossy green, and are pinnately dissected into 4 to 6 pairs of pinnae. Leaf margins are finely serrate. The undersurface of the leaves bear a number of small, punctate, multicellular glands, orangish in color, which exude a licorice-like aroma when ruptured. Glands may also be found on the stems and involucre bracts. Four or five fused involucre bracts surround each head. There are typically 3 to 5 yellow-orange ray florets, and 10 to 15 yellow-orange disk florets per capitula. The heads are small, 10 to 15 mm long, and including ray florets, 10 to 20 mm in diameter. The heads are borne in a clustered panicle of 20 to 80 capitula. The dark brown achenes are 10 to 12 mm long, with a pappus of 1 to 4 tiny scales and 0 to 2 retrosely serrulate awns which are 1 to 3 mm long.

The New World peoples have been using Tagetes minuta as a flavorful beverage, a medicinal tea, and a condiment since pre-contact times (Rees 1817). The local names vary by region, most commonly found in the literature as; chinchilla, chiquilla, chilca, zuico, suico, or the Spanish term anisillo.

A beverage is prepared from Tagetes minuta by steeping a "half-handful" of the dried plant in hot water for 3 to 5 min. The beverage may be consumed warm or cooled, and may be sweetened to individual taste (Neher 1968).

For medicinal use, a decoction made by steeping a "double handful" of the dried plant in boiling water for 3 to 5 minutes is used as a remedy for the common cold; including upper and lower respiratory tract inflammations, and for digestive system complaints; stomach upset, diarrhea, and "liver" ailments. The decoction is consumed warm, and may be sweetened to individual taste (Neher 1968; Parodi 1959; Cavanilles 1802).

Tagetes minuta is used as a condiment in Chile and Argentina. It is popular in rice dishes and as a flavoring in stews. In northern Chile suico is so highly prized that many people actively collect wild populations to dry a sufficient supply to last the winter (Kennedy pers. commun.).

Tagetes minuta is often referred to as a weed. Cabrera (1971) states that ".... Spegazzini mentions that this plant is a common weed of cultivation in the lower Rio Negro Valley...." Spegazzini and Cabrera appear to not understand the native outlook on "weeds." The farmers view the "weeds" as a second crop. Many of the Latin American farmers who do not practice industrialized agriculture will leave volunteer plants of Tagetes minuta in their fields. This second crop is beneficial in several ways: first, rapid growth of T. minuta quickly shades out other plant species that may be of less use to the farmer, second, it can be harvested for personal use, or for sale in city markets, and third, has been reported to aid in the retention of humidity in the field (Jimenez-Osornio 1991).

Tagetes minuta is commercially grown and harvested for its essential oils which are used in the flavor and perfume industry as "Tagetes Oil." The oil is used in perfumes, and as a flavor component in most major food products, including cola beverages, alcoholic beverages, frozen dairy desserts, candy, baked goods, gelatins, puddings, condiments, and relishes (Leung 1980). Brazil is one major producer of T. minuta for Tagetes Oil (Craveiro et al. 1988). Worldwide production of the oil was around 1.5 tonnes in 1984 (Lawrence 1985).

Tagetes minuta grows readily from seed sown directly into the soil once the danger of frost has past (B.M. Lawrence unpub. report). Plant height varies with conditions. Based on studies of herbarium material from the University of Texas and Lundell Collection; Field Museum, Chicago; New York Botanic Garden; University of Arizona; Michigan State University; and California Academy of Sciences; single, open grown plants range from 0.5 to 1 m tall, yet when grown in dense stands, a height of 2 m can be reached.

Tagetes minuta thrives in full sun. Competition for sunlight can lead to tall spindly plants with a low biomass. Higher biomass is attained from spacing the plants 1 m apart, and removal of the apical meristem at 30 days to stimulate branching. Meristem removal may be done mechanically.

Pests do not appear to be a significant problem with Tagetes minuta in field culture. Red spider mite and root knot nematode are often serious pests on cultivated forms of Tagetes erecta (Steiner 1941). In field studies in Austin, Texas, these pests have not been found on T. minuta despite the presence of large populations of these pests on T. erecta at the same site.

Harvest for use as a beverage or condiment is done manually by cutting the main stem at ground level, since the entire above-ground portion of the plant is considered useful. Plants over 1 m have individual branches cut off and dried. The plant material is folded and tied into bundles using twine, grasses, or a pliable branch of T. minuta (Fig. 2). The bundles are hung in a dry place, out of direct sunlight, to dry. Commercial hand harvesting is feasible due to low labor rates in South American countries. Since the whole plant is utilized, mechanical harvesting could be a viable option, and is used in essential oil production.

Tagetes minuta is rich in many secondary compounds, including acyclic, monocyclic and bicyclic monoterpenes, sesquiterpenes, flavonoids, thiophenes, and aromatics (Rodriguez and Mabry 1977). There is evidence that the secondary compounds in Tagetes are effective deterrents of numerous organisms, including: fungi (Chan et al. 1975), fungi pathenogenic on humans (Camm et al. 1975), bacteria (Grover and Rao 1978), round worms in general (Loewe 1974), trematodes (Graham et al. 1980), nematodes (Grainge and Ahmed 1988), and numerous insect pests through several different mechanisms (Jacobsen 1990; Saxena and Koul 1982; Maradufu et al. 1978; Saxena and Srivastava 1973). Many closely related plant secondary compounds have demonstrated medicinal value in humans (Kennewell 1990; Korolkovas and Burckhalter 1976) In vivo human studies of the secondary compounds of T. minuta have not been reported, although other Tagetes species have proven medically safe and efficacious (Caceres et al. 1987).

Hudson (1990) tested the many different secondary compounds for anti-viral activity, and determined that thiophenes demonstrated the greatest anti-viral action at the lowest doses, and with the least toxicity overall. Of the thiophenes, molecules with two or more thiophene units showed the highest activity. In all cases, the best success was against viruses with envelopes. Hudson tested 32 thiophenes, evaluated their efficacy and determined the 10 most effective ones (Fig. 3). Atkinson et al. (1964) first reported the thiophenes found in Tagetes minuta. A comparison of Atkinson's results to those of Hudson, shows that 7 of the 10 most effective anti-viral thiophenes are found in Tagetes minuta.

The work of Hethelyi et al. (1986) and that of Hudson (1990) indicate that the use of Tagetes minuta as a medicinal beverage by indigenous people may have a valid biological basis, although in vivo work has not been published. Further work is warranted, and could be used to aid in the marketing of herbal products of Tagetes minuta.

There are some unsubstantiated reports of poisoning by Tagetes minuta. Watt and Breyer-Brandwijk (1932) mention that death of children in South Africa is reportedly due to allowing them to sleep next to T. minuta state: "Unfortunately no proper investigation of these occurrences have been made and one doubts very much whether the plant has been the cause of death." Given the high suspected rate of infanticide of female children in Africa a half-century ago, T. minuta as the cause of death is highly unlikely. Hurst (1942) mentions that in Australia, in 1935, the plant is suspected in the death of several cows, "but the evidence was rather weak." and states that "A large dose of the plant in the flowering stage had no effect on sheep."

Chandhoke and Ghatak (1969), working with experimental animals, determined that the oil of Tagetes minuta has hypotensive, bronchodilatory, spazmolytic, anti-inflammatory, and tranquilizing properties. These actions are in accordance with the reported folk use of the beverage as a medical decoction. Given that generations of South Americans have used T. minuta as a beverage and condiment, it seems that use in moderation causes no ill effects; however additional toxicology studies would be necessary prior to marketing the plant as a beverage.

Tagetes minuta can be used for a hot or cold refreshing beverage. In taste tests at the University of Texas, subjects reported that the flavor is slightly sweet and anise-like, mild and not overpowering to the palate. Overall, the flavor was well received, although subject preference was significantly positively correlated to their preference for "black jelly beans or licorice."

Currently, many nations are actively seeking alternative cash crops to replace cultivation of illegal drug plants. Several species of Tagetes have been investigated, including Tagetes minuta (Bernal and Correa 1991; Arora 1989). Tagetes minuta as a herbal beverage has the potential to become a new crop for many of the hither-to drug growing areas, providing further research into the toxicology and marketing is conducted and remains promising. 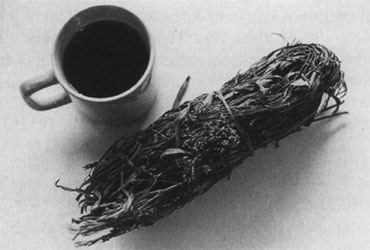 Fig. 2. Tagetes minuta purchased in a marketplace in Chile. The material was folded and wrapped with plastic twine while fresh.