The demand for Asian vegetables has expanded in the U.S. marketplace (Morr 1989; Lamberts 1992) due to increased ethnic diversity in the population, increased emphasis on healthy foods, and the desire to have variety in the diet. In 1993 and 1994 production statistics gathered by County Agricultural Commissioners in California, seven counties (Fresno, Monterey, Riverside, San Bernadino, San Luis Obispo, Santa Clara, and Ventura) reported Oriental Vegetables as a production category. In these counties, Asian vegetable production accounted for 1.0% to 5.0% of the farm-gate value of all fresh market vegetables.

In a previous review of Asian vegetables, Yamaguchi (1990) considered several vegetables including water bamboo (Zizania latifolia), lotus root (Nelumbo nucifera), water spinach (Ipomoea aquatica), yard-long beans (Vigna sesquipedalis), mitsuba (Cryptotaenia japonica), and winter radishes (Raphanus sativuus). Our intention here is to review the production and marketing of several other specialty Asian vegetables. In this paper we focus on examples from the extensive groupings of warm-season fruit vegetables from the Cucurbitaceae (Yang and Walters 1992; Ng 1993), including bitter melon (Momordica charantia), fuzzy melon (Benincasa hispida), angled luffa (Luffa acutangula), as well as several cool-season leafy vegetables including Chinese broccoli or gai-lan (Brassica oleracea var. alboglabra), Chinese flowering cabbages or choy sums (Brassica campestris var. parachinensis), and the leaves and flower buds of Chinese chives (Allium tuberosum). The cucurbits that are included are considered more heat tolerant than other more commonly grown members such as cucumbers and summer squashes. The cool season vegetables included are much appreciated for their quality (Willoughby 1995), but are not yet widely grown in the U.S. An additional emphasis in this paper will be on the postharvest handling characteristics of these vegetables.

Bitter melon is a cucurbit vine native to Asia with eastern India and southern China proposed as the centers of domestication (Yang and Walters 1992). It is now widely cultivated throughout the world for the immature fruits, and sometimes for the tender leafy shoots or the ripe fruits. Other species used for their immature fruits in a similar way are M. cochinchinensis and M. dioica. The immature fruits are stuffed, pickled, and sliced into various dishes. The immature fruits, called bitter melon, bitter gourd, or balsam pear, are harvested at developmental stages up to seed hardening; the fruits are warty in appearance and vary in size from 12 to 30 cm long.

The bitter melon vine is a rapidly growing monoecious herbaceous vine (Fig. 1) which needs to be trellised. Bitter melon is best adapted to hot to moderate climates and grows well in a variety of soils. Flowering begins about 1 month after seed planting. A fruit fly (Strumetia cucurbitae) attacks the fruit in some production areas, and the fruit are covered with paper protective bags. Fruits can be harvested at any stage of development, but are typically harvested fully sized but green, about 2 weeks after anthesis (Fig. 2).

The bitter principle, for which the fruit is named, is due to the alkaloid momordicine, not to cucurbitacins as in other members of the Cucurbitaceae. Immature fruits are less bitter than the mature but unripe fruits. Among the different types of bitter melons, smaller darker green types are very bitter, and the lighter green-colored fruit are slightly bitter. Bitter melon is also important for various medicinal properties (Morton 1967), with more recent attention focused on it as a hypoglycemic agent (Perl 1988).

The spongy white interior pulp and seeds of unpeeled immature bitter melon are sliced for use as a vegetable in various Asian dishes. The fruit are parboiled or soaked in salted water to remove excessive bitter principle. Proximate composition is similar to that of other immature cucurbit fruits (Table 1).

Good quality bitter melon should have a fresh appearance and the peel should be of uniform green color and free from visual defects. The developing fruit should be firm without excessive seed development, and free of defects such as decay and splitting, both associated with fruit ripening. When the fruit begins to ripen, the exterior color changes from green to yellow and the pulp becomes gelatinous and orange-red (Fig. 3). Contary to other cucurbits, the seed arils also change color from white-cream to a bright red. Among the more than 14 carotenoids identified during the ripening process, the principal carotenoid is cryptoxanthin (Rodriguez et al. 1976). Coincident with color changes, the fruit pulp loses bitterness and becomes sweet.

The bitter melon is harvested, selected for size and uniformity of fruit surface characteristics and commonly packed in carton or wood boxes containing 5, 10, or 20 kg. It is a chilling sensitive vegetable, and may be air-cooled to 10° to 12°C (Zong et al. 1995). Less commonly, the bitter melon is harvested, hydrocooled and treated with a postharvest fungicide. Bitter melon are intermediate in perishability among vegetable crops (Table 2, 3, 4).

Fuzzy or hairy melon is also called Chinese squash or moqua. Mature fruits of some Benincasa hispida [syn. B. cerifera (Thunb) Cogn.] are commonly called wax gourd, winter gourd or Chinese preserving melon. These can be stored for many months and are prepared stuffed and baked and in soups.

The immature fuzzy melon fruits have a delicious flavor, stronger and more distinctive than than of immature summer squash, although composition is similar to that of summer squash (Table 1). Flavor can change during storage, with the fuzzy melon taking on an acidic, less agreeable flavor (Table 4).

The diversity and antiquity of cultivars in China suggest that this crop may be indigenous to southern China (Yang and Walters 1992). Cultivars of B. hispida are classified on the basis of wax formation on the mature fruit, fruit size, and shape and pubescence of the immature fruits, from which its common name is derived. Generally, separate cultivars are used for immature vegetable production and for mature fruit production (Yang and Walters 1992). One vegetable type has fruits which are cylindrical and roundish with many bristle-like trichomes on the epidermis. The other (jointed gourd) has immature fruits which are narrowed in the center (dumbbell shaped) with their length 2-3 times their width. Small solid green fruit are the best; the younger the fruit, the firmer the flesh.

Fuzzy melon is a vigorous annual vine which is usually allowed to spread over the ground like a pumpkin or winter squash. It can also be grown upright, trellised. The immature fruits can have skin colour of various shades of green, depending on variety; all have white flesh. They may be picked within 1 week of flowering, but should not be harvested too mature. Once harvested, the fuzzy melon is susceptible to physical damage but is moderately perishable (Table 2, 3, 4); it is commonly picked and packed in wooden containers of 10 kg or more for commercial handling (Fig. 4).

Angled luffa is another cucurbit native to Asia cultivated since ancient times. The young immature fruit is also called Chinese okra, because of the okra-like shape and external appearance of the tender ridges. Luffas can only be eaten when young as mature fruits become very bitter due to the development of purgative chemicals (Heiser 1979; Yang and Walters 1992). The species used for vegetable production is usually a separate species from the more fibrous species routinely used for sponge production (L. aegyptiaca) (Davis and McCourley 1993). Immature fruits of Luffa acutangula are considered to be superior in flavor to immature fruits of L. aegyptiaca (Ng 1993).

High temperatures (30°-35°C) are required for reasonable (50%) seed germination and early growth in L. acutangula (Huyskens et al. 1993). Long days and high temperatures favored the development of more female flowers than short days and lower growing temperatures. Luffa are grown usually on trellises since trained plants are higher yielding. Each plant will yield from 10-23 fruits (Huyskens et al. 1993). Yields are about 3500 to 5000 kg/ha with a density of 10,000 plants/ha.

After harvest, angled luffa are very perishable. Water loss leads to toughening of the peel, but the fruits are chilling sensitive and the lowest recommended temperature for 1 to 2 weeks of storage is 10°C. Huyskens et al. (1993) showed that luffa rapidly lost weight, sugars, and acids during storage at 4°, 8° and 12°C, with quality losses minimized at 4°C. However, storage at temperatures below 10°C probably induced symptoms of chilling injury (Fig. 5) as reported by Zong et al. (1992). Therefore storage conditions at 10°C (50°F) with high humidity are recommended to reduce weight and quality loss.

Chinese chives have a long history of cultivation for culinary and medicinal use. Three horticultural products are derived from Allium tuberosum: the green (Fig. 6) and blanched leaves and the closed flower buds. In addition, the bulbs may be harvested and used like garlic. The common name Chinese chives is most often used for A. tuberosum, but it is also called oriental garlic, Chinese leek, garlic chives, or flowering leek. All parts of the plant have a mild garlic flavor, and like common chives, Chinese chives are mainly used as a fresh culinary herb (Larkcom 1991).

Chinese chives is a perennial plant 30 to 45 cm in height that grows in a clump of 4 to 10 bulbs, each producing 4 to 5 thin flat leaves. Chinese chives is a cool season vegetable which flowers in the hot summer months. The plants live for many years, developing large spreading rhizomes. Chinese chives are usually divided into leafy and flowering types, although most current cultivars are dual purpose. They tolerate a wide range of climates and soils.

As a commercial crop they are grown in beds as a semi-permanent crop for 4 to 5 years, and are intercropped with quick growing leafy greens. Limited harvesting is done during the first year's growth so that reserves build up in the roots. Blanching, or growing the chives in the dark produces a higher value product with soft, yellow leaves and a more subtle garlic flavor. Typically, a green chive production cycle is alternated with a blanched chive production cycle under favorable growing conditions. Under slower growing conditions, only one or two cuttings of blanched chives per year will be taken as it weakens the plant. After harvesting green leaves, resprouting plants are covered with clay pots, or commercially, with plastic films, straw mulches or earth.

Green chives are be stored at least two weeks at low temperatures (Zong and Cantwell unpubl.). Blanched chinese chives are higher respiring and more perishable than the green leaves, and shelf-life is <5 days. Both green and blanched chives are packed in waxed boxes containing 5 to 10 kilos of product. They may be vacuum-cooled, air-cooled or ice-cooled. A paper liner used inside the boxes may result in heat build up, expecially if the product has not been precooled and the box has little venting. Flower buds are bunched and banded and shipped vertically in single layer trays or packed horizontally in boxes used for the leaves.

This excellently flavored broccoli relative is also called Chinese kale or kailan. The edible vegetable consists of a tender green flower stem with buds of what will become white flowers. The leaves and stems are light to medium green in color and are covered with a white haze due to cuticle and wax development (Larkcom 1991).

At harvest the flower buds should be closed (Fig. 7). After harvest the stem becomes tougher than does that of Chinese kale and it may be peeled before use much as broccoli stems are. Gai-lan, like broccoli, is very perishable. Postharvest defects and recommended conditions are described in Table 2, 3, 4.

Choy sums are also referred to as mock pak choy. This vegetable is grown and harvested similar to gai-lan. The white to light green stems are cooked without peeling and have a pleasant, mild flavor. Important quality characteristics are a tender stalk and closed yellow flower buds. For optimum quality, cooler growing weather is required. Under Florida conditions, average days from fall seeding to harvest maturity are 60-70. Choy sum is planted with 3-4 rows per bed with plants spaced 20-30 cm apart; planting density varies from 72,000 to 108,000 plants/ha. Average seasonal yield, with 2 to 3 harvests, is about 620-980 18 kg-cartons/ha (Shuler 1995). Postharvest requirements are similar to those of other cool season leafy vegetables (Table 3 and 4). 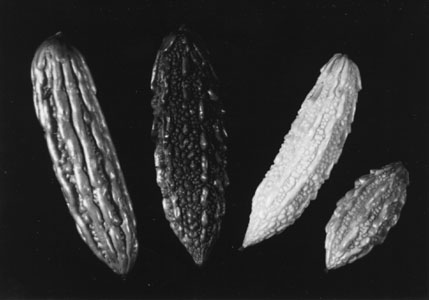 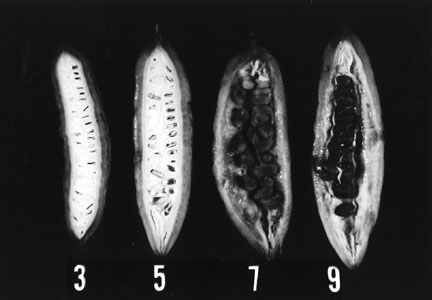 Fig. 3. Various stages of development of bitter melon: immature fruits on the left, ripe fruit with red arils on the right. 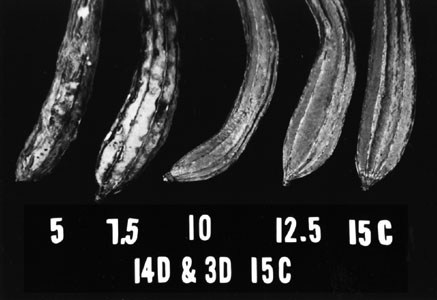