Tempeh, a soyfood which originated in Indonesia several hundred years ago, is a valuable source of plant protein. Partially cooked dehulled soybeans are inoculated with the fungus Rhizopus oligosporus and left to incubate for about 22 h at 30°C. The white mycelium which develops ties the soybeans together and improves the nutritional profile, resulting in a semi-firm cake which can be served in a large variety of dishes.

When tempeh began to be produced in commercial quantities in the United States, the most prevalent production method was that developed by Martinelli and Hesseltine (1964). The partially cooked, inoculated soybeans were incubated in a perforated plastic bag and frozen after incubation was completed.

There are however numerous advantages to incubating tempeh on trays rather than in plastic bags. The finished tempeh can be pasteurized, cut into various shapes, and premarinated with different flavors before being frozen. In this paper we describe a new method for producing tempeh on trays.

The first book on tempeh production (Shurtleff and Aoyagi 1980) reported problems utilizing stainless steel trays for tempeh incubation because the heat generated in the heat producing phase of incubation was insufficiently dissipated. The original experiments by Martinelli and Hesseltine were even more negative: "Metal trays without perforations, no matter what kind of covering was used, did not produce a good tempeh, since aeration of the whole mass of soybeans was insufficient for mold development." We first overcame this problem by incubating on a specially designed rack which circulated air under the trays. However this necessitated multiple handling in order to end up with a pasteurized product. We concluded therefore that it was necessary to abandon the traditional incubation room concept.

Tests had shown that circulating water was excellent for heat dissipation. A waterbath incubator would allow pasteurization at the end of the incubation period by raising the waterbath temperature to 80°C for 15 min (Fig. 1).

The substrate is on a stainless steel tray. This tray sits on a support and is partially submerged in the waterbath. An insulated lid covers this tray and seals it from the environment. Air is injected under the lid and drifts over the incubating tempeh to exit at the opposite end. The temperature of the circulating waterbath is closely regulated for both heating and cooling.

The utilization of stainless steel trays for this process was important since food-approved stainless steel is the standard in the commercial food business. Aluminum trays were not considered since the relation of aluminum to Alzheimer's disease is not clear at this time. Other metal trays are available which have a food-approved coating, but this would not stand up to daily use. Fiberglass trays with a food-approved coating would not hold up to the high temperatures reached during pasteurization.

We subsequently constructed an incubator/pasteurizer with 14 large stainless steel trays which has now been operating flawlessly for three years (Fig. 2). This apparatus and method has been patented (Pfaff 1993, 1994).

A production incubator/pasteurizer for a larger facility might consist of two waterbath units (one above the other) using a total of 28 trays and producing 70 kg of tempeh every 24 h. Because stainless steel trays are used, the product can easily be premarinated with different flavors before being packaged and frozen. For example, premarinating with a low salt tamari--a wheat free soy sauce--is suggested as an additional product line.

During our market testing in the regional market, we have sold the product as unflavored patties and in grated form. We have produced this tempeh on a part time basis and marketed about 3200 kg/yr. Acceptance by health conscious individuals and chefs indicate this product has a very promising future as a healthy alternative food.

The tempeh we produce (made with organically grown Vinton soybeans and some barley) has an excellent nutritional profile but has 26% calories from fat. This might be improved by creating a low fat soybean. Modification of the Rhizopus oligosporus culture (which produces a pure white mycelium) is suggested. Tempeh with a light brown mycelium would be more acceptable to the public since it would look more like the customary meat protein. 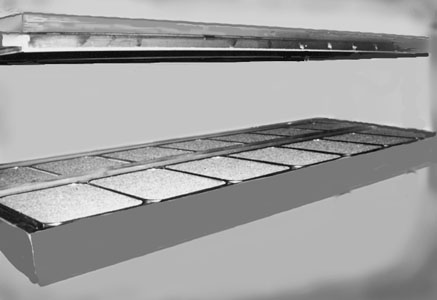