The tree spinach (Cnidoscolus chayamansa McVaughn, Euphorbiaceae), called "chaya" in south Texas, is popular in Mexico and Central America and has been introduced into the United States (mainly South Texas and Florida) for potential uses as a leafy vegetable and/or as a medicinal plant. The plant is an attractive shrub, 3 to 5 m tall (Breckon 1979). The leaves are broad and may consist of 3 or more lobes with fleshy petioles (Fig. 1). The white-colored flowers, which are usually borne on cyme-branched inflorescences, may contain 3-forked arrangements in which the pistillate flowers are located on the basal fork. The staminate flowers are expanded distally from the base of the lobes. Mature seeds and fruit are rare and unknown (McVaugh 1944).

The young shoots and tender leaves of chaya are cooked and eaten like spinach. They comprise part of the staple diet and are the main dietary source of leafy vegetable for the indigenous people of Yucatan peninsula of Mexico and Kekchi people of Alta Verapaz in Guatemala (Harris and Munsell 1950; Booth et al. 1992). There are many underexploited native leafy plants with potential as a traditional food source (NAS 1975). With current renewal of interest in household gardens, attention is being focused on promoting some of these plants as leafy green vegetables among populations in the developing countries (FAO 1987). The edible parts of chaya plant, which taste like spinach when cooked, provide important nutritional sources for protein, vitamins (A and C), minerals (calcium, iron, phosphorus), niacin, riboflavin, and thiamine among populations that cannot afford expensive foods rich in these nutrients (Yang 1979). The plant may also constitute a potentially valuable leafy green vegetable here in the United States and elsewhere.

Chaya traditionally has been recommended for a number of ailments including diabetes, obesity, kidney stones, hemorrhoids, acne, and eye problems (Diaz-Bolio 1975). Chaya shoots and leaves have been taken as a laxative, diuretic, circulation stimulant, to improve digestion, to stimulate lactation, and to harden the fingernails (Rowe 1994). Like most food plants such as lima beans, cassava, and many leafy vegetables, the leaves contain hydrocyanic glycosides, a toxic compound easily destroyed by cooking. Even though some people tend to eat raw chaya leaves, it is unwise to do so.

While the nutritional value of chaya has been demonstrated (Martin and Ruberte 1978; Booth et al. 1992), none of the purported therapeutic values of chaya leaves has been substantiated with scientific experimentation. Therefore, the present study reports on nutritional composition of raw and cooked chaya leaves and the results compared with the nutritional composition of spinach leaves. Also a possible antidiabetic effect of the aqueous leaf extracts or chaya tea, administered through drinking water to streptozotocin-induced diabetic rabbits, was evaluated.

The experimental animals (rabbits) for this study were supplied by Dr. Steven Lukefahr of the Department of Animal and Wildlife Sciences, Texas A&M University-Kingsville. All animals were housed and maintained in compliance with Texas A&M University-Kingsville IACUC policy on animal care and use. The rabbits were fed with standard rabbit chow and given water ad libitum. Diabetes was induced by a single subcuteanous injection of 60 mg/kg streptozotocin (STZ), after fasting for 18 h, according to the method described by Bonner-Weir et al. (1981). The rabbits exhibited post-STZ blood glucose levels that were at least double that of the pre-STZ levels one week after diabetes had been induced.

The leaves of C. chayamansa were collected from plants grown in the greenhouse. About 10 g of the leaves was extracted with boiling water (1000 mL) for 30 min until the volume of the water had been reduced to 90% of the original. The tea (900 mL) was filtered and used in the subsequent experiments. Two groups of 8 rabbits each were used. The first group of 8 rabbits were normoglycemic (non-diabetic). Four of the normoglycemic rabbits recieved water (control) only and the remaining 4 received chaya tea treatment only. The second group of 8 rabbits were hyperglycemic (diabetic). Four of the diabetic rabbits received water only and the remaining 4 received chaya tea only.

Before administering the tea or water (control), blood samples were obtained from the ears of 18 h fasted nondiabetic and diabetic rabbits using a capillary tube. Then the tea or water was administered orally through drinking water bottles ad libitum. Blood sampling was repeated at hourly intervals for 6 h after the oral administration. Blood glucose was determined using a blood glucometer (Miles Inc., Diagnostic Division, Elkhart, IN, U.S.). The mean blood glucose values ±SE were determined and the significance of the difference between the means of treated and control groups was established by Student's t-test.

The nutritional analysis of chaya (C. chayamansa) leaves and spinach (Spinacia oleracea L.) are presented in Table 1 for comparison. Chaya leaves were found to contain substantially greater amounts of nutrients than the spinach leaves. The chaya leaf is especially high in protein (5.7%), crude fiber (1.9%), calcium (199.4 mg/100 g), potassium (217.2 mg/100 g), iron (11.4 mg/100 g), vitamin C (164.7 mg/100 g), and carotene (0.085 mg/100 g). The levels of chaya leaf nutrients, in this study, agree with published reports (Martin and Ruberte 1978; Munsell et al. 1949; Booth et al. 1992) and are two to threefold greater than most edible leafy green vegetables. In terms of the average nutritive value, chaya leaves [14.9] is by far superior to other leafy green vegetables such as spinach [6.4], amaranth [11.3], Chinese cabbage [7.0], and lettuce [5.4] (Grubben 1978). While some edible leafy green vegetables are usually good sources of mineral macronutrients (Levander 1990), chaya leaf furnishes appreciable quantities of several of the essential mineral macronutrients necessary for human health maintenance. For example, potassium has been shown to be an important mineral nutrient in the control of hypertension and in the reduction of risks of stroke (NRC 1989), calcium is important for ossification and iron is necessary for normal hematopoiesis (Hodges et al. 1978). Brise and Hallberg (1962) reported that vegetables, such as chaya, with high vitamin C content may enhance absorption of nonheme iron.

Analysis of raw and cooked samples of chaya leaves revealed that cooking may increase the relative composition of carbohydrate and fat and decrease relative composition of crude fiber and protein (Fig. 2). On the other hand, cooked samples of chaya leaves were considerably higher in calcium, phosphorus and iron while the potassium content was relatively lower than in the raw samples (Fig. 3). The increase in some of the mineral nutrients may be due to the cooking process, which allows extraction of the nutrients from the tissues, therefore increasing the percentage of mineral elements while decreasing moisture content (Booth et al. 1992).

Following the oral administration of chaya tea, the blood glucose levels of the diabetic rabbits were gradually lowered from a high of 118 (baseline at 0.0 h) to 87 six hours after administration. The blood glucose level of 87 is similar to blood glucose levels of normoglycemic rabbits on drinking water (Table 2). The blood glucose levels of non-diabetic control rabbits that were given chaya tea showed a slight increase (i.e. hyperglycemia) above the baseline 85 at 1 to 2 h after administration, but rapidly stabilized thereafter (Table 2). The reason for this transient hyperglycemia is unknown and needs to be investigated. The results obtained in this study suggest that in STZ-induced diabetic rabbits, aqueous leaf extracts of C. chayamansa may be effective for treatment of non-insulin dependent diabete mellitus (NIDDM) symptomatology. This is a first report on hypoglycemic effect of chaya plants. The present report is preliminary in nature and additional studies will be needed to properly characterize the antidiabetic potential of chaya in diabetic animals. Also further studies will be necessary to determine the effective dosage, mechanism of the hypoglycemic activity and the active hypoglycemic principle present in the leaves of C. chayamansa.

The potential of C. chayamansa for human food and health has a significant implication for the plant as a horticultural crop. Although demand for chaya, as a medicinal plant, has recently increased among the Hispanic population in the United States, the plant has the potential to make a significant nuritional contribution to the vegetable diet as well, because of its high nutrient content. The development of chaya as a new horticultural crop would transcend the ethnic popularity and create a worldwide market for the plant and its products, whether as a leafy green vegetable and/or as a therapeutic herbal tea.

It is noteworthy that the chaya plant is drought resistant, which is of a particular value in areas with short seasonal rainfall and shortage of green vegetables (Peregrine 1983). Growth of the plant is rapid and edible leaves and shoots could be produced within a short period (8 to 10 weeks). Propagation by cutting is easy and the woody stem sections readily root. Few pests and diseases are known to be of any significance in the cultivation of chaya plants. One disadvantage is the presence of toxic hydrocyanic glucosides in the leaves. However, cooking, which is essential, inactivates the toxic compound. Other Cnidoscolus (chaya) species are being examined in our laboratory at Texas A&M University-Kingsville to genetically select species with high leaf and shoot biomass yield and lower hydrocyanic glycoside content. Additionally, we are conducting research on genetic improvement, propagation, field production, potential for processing and marketing of chaya and its products in south Texas.

zData for spinach were obtained from the USDA (1984).
yAverage nutritive value according to Grubben emprical formula (1978). 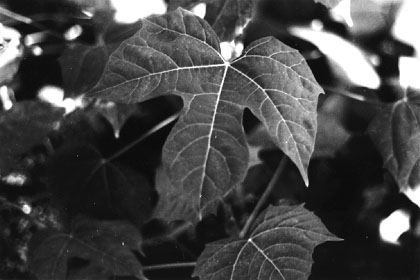 Fig. 1. A potted chaya plant. The young leaves and shoots are edible after being boiled in water.